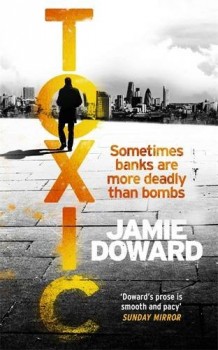 The body of a man, headless and missing his hands, turns up on a deserted beach at Dungeness in Kent. He is soon identified as an important banker, but why he should have been murdered is a mystery.

It is clear that Jamie Doward wanted to make an impact with his first novel and, whilst it is not entirely successful, he has certainly managed that. It is unusual for a story involving the CIA and MI5, a wealthy Arab prince, high finance and murder to begin on a virtually deserted part of the Kent Coast. However, when a body apparently washed up there is identified as an important employee of Higgs Bank, McLure, a member of MI5, becomes very interested because he has long had suspicions that the bank is in some way connected with American Intelligence.

This is immediately confirmed for us when we encounter Dick Reynolds, who is secretly running the bank on behalf of the CIA, which had been responsible for its foundation. It had been found that, whilst they could track supplies of weapons grade plutonium, they couldn't track the sources of the money that financed terrorism. The intention behind the creation of Higgs Bank was to fill this gap in intelligence, although, as Reynolds knows, so far it had been a failure.

Kate Pendragon has been seconded to MI5 where it is hoped that her financial expertise will be useful in tracking money laundering. McLure, who is unable to discover anything tangible that would prove Higgs Bank was suspect, is at first unable to convince Kate that his suspicions are justified, but gradually she begins to see the connection.

She is an interesting character, recently widowed, her husband, a soldier, having been killed. Her obsessive running, together with a number of unsatisfactory affairs - of which McLure had been one - are vain attempts to forget him. However, when she meets DCI Sorrenson of the local Kent police, there is an attraction, not an instant one, but one that persists. The two of them pursue what rapidly becomes a very complicated case that requires not only her financial expertise but also tenacity and a degree of bravery – both moral and physical – that she didn't know she possessed. Sorrenson too, though less important in the novel, is a well-developed character. The same cannot, however, be said for the Arab prince and his associates, nor for Reynolds, the controller of Higgs Bank.

This failure to make them lifelike is partly due to the plot itself. It is rather difficult to believe that an entire bank would have been created merely to assist in tracking payments of money to terrorist causes and, whilst it is possible to follow the plans being made by the prince to bring the bank down, it is all rather vague and unconvincing. The back-up plan is even less believable, particularly the part played by Kate in frustrating it.

The author attempts to sustain the interest by a number of violent deaths scattered throughout the novel but this doesn’t entirely work, mainly because it is not always clear how they are connected to the main events. However, this is not to say that the novel doesn’t have its share of excitement and those readers who like their thrillers to contain a lot of action won’t be disappointed.