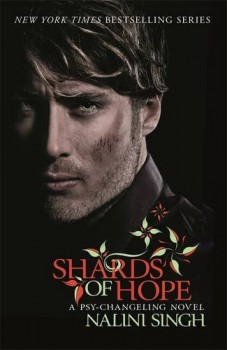 Arrow Squad leader Aden Kai has been kidnapped and his psychic abilities are being blocked. The rest of the world doesn’t know if he’s alive or dead, and the way things are looking, dead is going to be the most likely outcome.

This is the second time I’ve come late to one of Nalini Singh’s series. The first time I wandered in looking lost on book seven of her Guild Hunter series, and this time I’m so far behind that it’s ridiculous. But despite the fact that Shards of Hope is number 14 in the Psy-Changeling series, I still jumped in feet first. To my surprise, I didn’t flounder around quite as much as I’d expected, and I picked up most of what I needed to know pretty quickly, but I did have to skip past the first short chapter, which made utterly no sense to me at all.

Aden Kai, leader of elite black ops squad, the Arrows, has been kidnapped and imprisoned along with Zaira Neve, one of his team members. Something has been done to cut them off from the telepathic network that links them to the rest of the Arrow and to each other. But even injured and robbed of their psychic abilities, Aden and Zaira make a formidable team, and the story gets off to a flying start with the description of their escape and subsequent evasion of their erstwhile captors.

They’re lost in an inhospitable environment, up against far superior forces, and more than half dead. Their only hope of survival lies with a changeling pack, deeply suspicious of anyone other than their own kind. Neither Aden nor Zaira have any idea who snatched them, and very quickly, they’re up to their necks in danger from all side, not knowing who is to be trusted.

Singh has woven a rich tapestry of three very different races locked in a three-way power struggle: the psy, the changelings and the human. There were subtleties to the undeniably rich world-building that I’m sure I must have missed – and I never did work out what the references to Silence were all about – but none of that lessened my enjoyment of the book. Singh’s great talent lies in her ability to juggle a cast of thousands, while still managing to draw vivid and easily distinguishable pen-portraits of all the major players (and a cast list at the beginning did provide a useful aide memoire). I was quickly caught up in the lives and loves of the Arrow squad, and the vast amount of politics surrounding them.

Aden Kai is a complex character trying to make a difference, especially to the damaged children brought up without parents or family to be elite soldiers and assassins. There are plenty of people who want Aden to fail, but he finds an unlikely ally in Remi, the leopard changeling and leader of the RainFire pack. Together, two very different groups end up working together against common enemies.

Shards of Hope left me wanting to learn more about the background to the characters and the elements I didn’t understand intrigued rather than alienated me. Nalini Singh’s characters are a great draw in their own right, and when you add a brisk pace and complex plotting to the mix, it’s not hard to see why the series is still going strong.