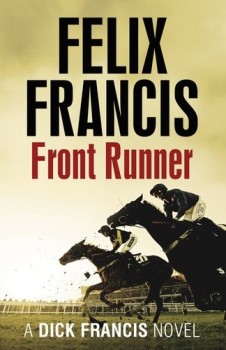 Jeff Hinkley is back, and investigating the racing scene again, but someone is determined to see him dead.

Jeff Hinkley is an investigator for the BHA – British Horseracing Authority. When the jockey Dave Swinton tells Jeff that he's being blackmailed and forced to lose races, but provides few other details, Jeff knows he has a new case. When he goes to see Swinton again, he ends up locked in a sauna and very nearly dies. He blames Swinton, but then the jockey turns up dead.

Jeff keeps investigating, and people keep on trying to kill him. Leaving the investigations in the hands of the Police, Hinkley takes a Christmas break in the Cayman Islands with his new rich girlfriend he met at the races the day Swinton told him about the blackmail. All is not idyllic in the Caribbean, however, and Hinkley's in danger again. Finally he discovers why someone is really trying to kill him, and it has very little to do with horseracing.

In every Felix Francis novel, just as in a Dick Francis novel, you know the protagonist will be in danger at some point. The first attempt on Jeff Hinkley's life comes very early in the novel, but sadly he manages to escape the boiling sauna. Jeff, you have your moments, but this novel really does make me dislike you very much. You seem to have lost some of your get up and go, not to mention your intelligence.

I want my heroes to keep fighting, to have unswayed morals, to treat their partner well. Everyone has flaws, and that's fine, but Jeff really can’t make up his mind what he’s doing. Admittedly, people keep trying to kill him, and although he does a reasonable job at starting his investigation, when he just gives it up and agrees to spend Christmas in the Cayman Islands, I'd had enough.

Too much moaning about his pathetic life, a bizarre lack of understanding of police investigative methods, and buying your new girlfriend the perfume you used to get your last partner – Jeff, just no. Trying to understand the motive of a murderer is 'mumbo jumbo', but tax avoidance is 'eminently sensible'? No, Jeff. Your unsubtle investigating towards the end of the book was bound to land you in hot water, and it did, so I didn't have much sympathy then, either. Plot and excitement doesn't have to involve hitting the protagonist with the stupid stick.

Front Runner wasn't so bad that I didn't want to carry on reading, and overall I have to say it was a mildly entertaining read. I like how Francis quotes racing rules, but expositions in the book generally felt forced and over long. There's a lot of plot repetition and not much progress in the racing investigation, and in the end it's the police that wrap that one up, score nil to Jeff. I'm usually a big Francis fan, and I'm sorry but Jeff Hinkley needs to go back in a box and never come out again. The best bit of the book might have been the Christmas cracker jokes.