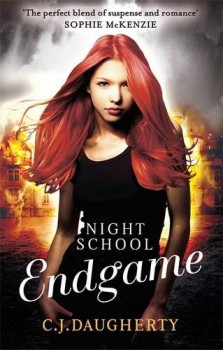 The struggle for control of Cimmeria Academy reaches an explosive climax.

I honestly can’t remember the last time I read five books in a series, one after the other, but Night School, CJ Daughtery’s young adult series, got its hooks into me and just wouldn’t let go.

Allie Sheridan hated the idea of boarding school at first, but her parents didn’t give her any choice in the matter, not after one brush with the law too many. But Cimmeria Academy isn’t any old boarding school, and it certainly doesn’t bear any resemblance to any boarding school that graced the pages of an Enid Blyton or Angela Brazil novel, although I could easily imagine Alicia from Malory Towers throwing herself into unarmed combat lessons in the very hush-hush extra-curricular activities that take place after hours in the gothic towers of the academy.

There, the children of the rich and the powerful are being groomed for their future roles in life as part of a shadowy organisation called Orion, which has its tentacles absolutely everywhere, wielding more power than many governments. The power struggle that’s been building up over the past four books finally comes to a head and sees the sinister Nathaniel, who wants to take over the organisation, pitted against its current head, Allie’s grandmother, Lucinda Meldrum.

In the midst of all this, Allie has a decision to make between the down-to-earth, loyal Carter West, and the suave, extremely rich Sylvain. Allie has feelings for both of them and doesn’t want to hurt anyone, but she has to make a choice. The love-triangle angst angle is never over-played as Endgame romps along at a hell of a pace, pitting the teenagers against armed assailants who won’t hesitate to kill anyone who gets in their way.

One of the series’ great strengths lies in Daugherty’s ability to make the peril very real indeed, with teenagers working alongside the teachers at Cimmeria, never shielded from the harsh reality of the power struggle they’re caught up in. There are deaths and plenty of deception, as well as a rich seam of black humour. Fourteen-year-old Zoe was one of my favourite characters. She speaks her mind in a delightfully disconcerting manner, and her new-found interest in blood provides some much needed light-relief when the going gets really tough. The adults are equally well drawn, from the icily competent head of security, Raj Patel, to computer genius Dom, and the headmistress herself, Isabel le Fanult, who’s far more interesting and charismatic than my headmistress ever was!

This is very definitely a series not to miss. Start from the beginning with Night School and don’t expect to emerge until you’ve galloped through Legacy, Fracture and Resistance to reach Endgame, which provides a very satisfactory conclusion to the gripping, and extremely dangerous power struggle that’s been played out over five books.