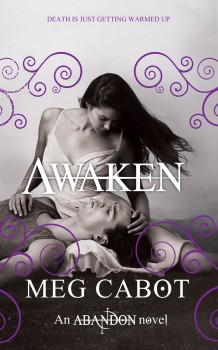 The ferries that take the dead to their onward destinations have stopped running and the souls of the dead are mounting up, with nowhere to go. It’s up to 17-year-old Pierce Oliviera, the new consort of the Lord of the Underworld, to restore order.

Awaken, the concluding part of Meg Cabot’s young adult series that started with Abandon and Underworld, follows the story of 17-year-old Pierce Oliviera, the consort of John Hayden, the Lord of the Underworld. I came to these books through the audio series but, unable to find the final part in that format, I turned to the print series to see how Pierce’s story played out, and I wasn’t disappointed.

Things aren’t going well in the realm of the dead. The balance between life and death has been disturbed, and it seems that even the Lord of the Dead himself is at risk. The ferries that have always taken the spirits of the dead onto their final destinations have stopped running, and one has crashed, apparently killing John.

In the mounting chaos, some of the dead seem determined to get involved, and it’s up to Pierce, the new Lady of the Underworld, plus a motley bunch of helpers, to take on the avenging Furies and find a way of both restoring order to the realm of the death and bringing John Hayden back to life – or should that be death? Things aren’t always straightforward down below, or in the world above – storm-lashed Isla Huesos, the sinisterly-named Island of Bones.

While a tropical storm rages around the island, Pierce has to delve deeply into John’s background with the help of Mr Smith, the cemetery sexton, her cousin Alex and feisty friend Kayla, as well as hard-hitting, tough-talking Frank, one of John’s helpers in the underworld. She also has to confront her parents and convince them that her grandmother is possessed by a fury and has been trying to kill her. Not the easiest of tasks in either world!

Even though I was reading Awaken, rather than listening to it, it was obvious that Natalia Payne’s narration for Whole Story Audiobooks has left an imprint on me, as I found I was still hearing her character voices quite clearly in my head as Pierce’s story unfolded. Cabot excels at lively characters, with even the minor ones coming to life (and death) and muscling their way into the story. There’s Reed, a man in tropical shorts who really can’t come to grips with the fact that he’s dead, but doesn’t intend to let that stop him getting involved; gentle Chloe, clinging to her Christian faith, determined to be nice to everyone; and elderly, very capable Mrs Eagle. The scene with Pierce’s billionaire father teaming up with her boyfriend to help out in the underworld is a sideshow not to be missed, either.

Awaken delivers a very satisfactory conclusion to the Abandon trilogy, and if you’ve read the others, this is definitely one for you. If you haven’t, then treat yourself to others, either in audio or print, and take a trip to both Isla Huesos and the Underworld for Meg Cabot’s entertainingly modern take on the Greek myths and the story of a young woman and her love for the Lord of the Dead.