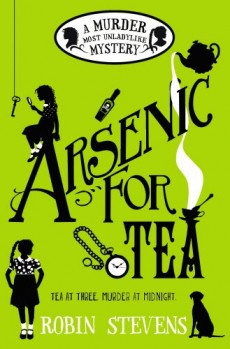 Arsenic For Tea, the second in Robin Stevens’ Wells and Wong Detective Society series, sees Daisy Wells and her friend Hazel Wong spending the school holidays in the fading grandeur of Daisy’s ancestral home, Fallingford. A governess, Miss Alston, has been engaged to keep them out of mischief as the family and various guests assemble for Daisy’s 14th birthday party, including two of the girls’ schoolfriends, sharp, sarcastic Kitty and timid, law-abiding Beanie.

Daisy’s father, Lord Hastings, is jovial and forgetful, kind to the girls and the family dogs. Her mother is absorbed equally in herself and one of the other guests, her new friend, the rude and obnoxious Denis Curtis, who seems to spend rather a lot of time nosing around both his hostess and the family antiques. Daisy’s great-aunt Saskia floats around Fallingford appropriating small items of value, seemingly oblivious to whether anyone else notices or not. Then there’s Daisy’s beloved uncle, the dashing Felix Mountfichet, who’s rumoured to be a spy, or something equally glamorous. Bertie, Daisy’s elder brother, and his friend Stephen, complete the motley cast of a classic English country house mystery set between the wars in 1935. Oh, and to add to the classic feel of the story, Fallingford is all but cut off from the surrounding villages by rising flood waters.

When the utterly obnoxious Mr Curtis is taken ill at Daisy’s birthday tea and subsequently dies of what could be dysentery, or what could just as easily be arsenic poisoning, naturally there’s a positive plethora of suspects, including all of Daisy’s family, a fact that naturally causes her some concern. But despite that, Daisy throws herself headlong into a new case for the Detective Society, with her once again as President, while loyal, intelligent Hazel is both Vice-President and Secretary. With Kitty and Beanie co-opted as assistant investigators, the four friends are determined to get to the bottom of Mr Curtis’ very suspicious death.

With motives a-plenty, it’s not an easy task to sift through what they have in the way of clues and evidence, and matters are made worse for Daisy by having to witness the obvious rifts in her parent’s marriage. Hazel sees her friend in some rare moments of vulnerability that cut through Daisy’s usual bright, breezy personality. Hazel herself is somewhat off-balance in the dusty confines of Fallingford, and has to endure the usual casual racism characteristic of the period.

Arsenic For Tea will appeal to anyone who enjoys golden age crime novels and Daisy Wells and Hazel Wong make an excellent teenage crime-busting duo in a gentle but penetrating look at what goes on behind closed doors in the upper echelons of English society.