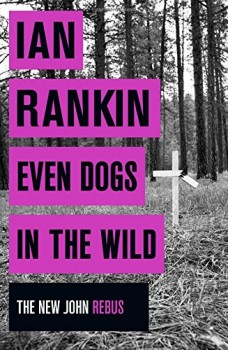 Even Dogs In The Wild

John Rebus has finally been retired off – but he talks his way back as a police consultant after old adversary Ger Cafferty narrowly dodges a bullet.

John Rebus has finally been put out to grass – but he’s not the man for pipe and slippers. When a prominent lawyer is shot, Rebus’s old adversary Ger Cafferty narrowly dodges a bullet and a cryptic note is found at the scene of both crimes, he talks his way back onto the enquiry as a consultant.

Like Dogs in the Wild is very much a matter of mavericks going in their own direction. Siobhan Clarke seems to spend a lot of time watching as Rebus, and that other outsider, DI Malcolm Fox, follow their own lines of enquiry.

Given Rankin’s strength in creating enduring characters, Fox has always been a weak link. He didn’t really have the clout to carry his own story, and his appearances in the main series have veered towards manufactured tension between Fox and other officers, and between the chalk and cheese that’s him and Rebus. And he doesn’t seem to be the sharpest knife in the drawer when it comes to detective work, based on some of his decisions here. You can quite see why he got shunted off to Complaints!

Fox’s presence, given his awkward relationship with his sister, and the fact his father is in fading health, seems a convenient device to allow other characters to muse on families. Rebus, with a rare blast of conscience, visits his daughter and granddaughter after a long drive north to interview a suspect.

The plot is perfectively serviceable and grimly convincing. At times it feels like it takes second place to the characters – which is actually fine, given how far we are into the series and how Rankin excels at cameo roles. But it’s good, old-fashioned attention to detail that gives the cops a break in what had been a bamboozling case.

Even Dogs in the Wild is measured, intense and thoughtful – and never once drags, despite the action occasionally appearing to be on a back-burner.  Rebus is one old dog who will grab you by the trouser-leg, dig his teeth in and never let go. And the tension between generations – both cops and gangsters – proves that this is a series with a strong pair of legs and with so much to say about modern-day Scotland.