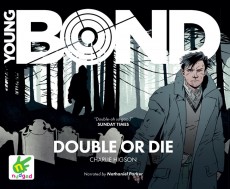 One of his professors has disappeared and young James Bond has to decipher and follow a series of cryptic clues that lead him into some very dangerous places.

The third book in Charlie Higson’s Young Bond series starts with a tense kidnap scene in a London cemetery. Later, an enigmatic letter arrives at Eton, purporting to be the resignation of one of James’ professors, Alexis Fairburn, but James and his friends spot various mistakes and oddities in the letter and aren’t convinced by the explanation. Despite the attempts of those in authority to get them to drop the subject, James and his friends – crossword expert Pritpal and Perry Mandeville, the leader of the Danger Society – are equally determined to get to the bottom of their teacher’s disappearance.

A series of cryptic clues set the boys on a trail that leads them to a murder in Cambridge, and James is soon up to his eyes in danger, as usual. A fast-paced car chase through the countryside ends with the destruction of his beloved Bamford and Martin motorcar and James almost dead in a river. It takes all of James’ ingenuity to stay one step ahead of the thuggish Piranha brothers – oops, sorry, I mean Wolfgang and Ludovic Smith – who stay in inexorable pursuit throughout most of the book, as all good Bond villains should.

The action all takes places over a relatively short space of time, and remains firmly in the UK, with the docks of the East End of London being about as exotic as locations get. James is soon looking for more than just a missing professor. He’s also on the trail of a mysterious machine that he has to prevent from falling into the wrong hands.

Nathanial Parker is very definitely a safe pair of hands for Higson’s Young Bond and his friends, shifting easily from Perry Mandeville’s upper class tones to the rough East End accent of the latest Bond girl, tough Kelly Kelly, the sister of James’ friend, Red Kelly, from SilverFin, the first book in the series. Kelly is certainly no stereotypical damsel in distress there for no more than decorative reasons. She throws herself into the action every bit as much as James and his friends do and, as usual, Higson does no more than skirt the romance angle, probably in deference to a young male readership.

The action and danger ramp steadily up through Double or Die and James gets increasingly battered and exhausted as he tries to stay one step ahead of the Smith brothers and an impressively villainous cast, including the aristocratic Sir John Charnage, who’s quite prepared to kill James by forcing him to drink lethal amounts of gin.

There’s something rather reminiscent of the early Terminator movies as James tries to stay out of the clutches of the bad guys in a series of dramatic scenes in the London docks. Higson’s also an equal opportunities writer of villains, as the chilling Colonel Irina Sedova, known as Babushka, proves. She’s every bit as ruthless as the men.

Double or Die is as entertaining as its two predecessors, and is none the worse for its more down to earth locations. The baddies are ruthless and downright nasty, our heroes are plucky and resourceful and the girls are just as tough as the lads. This is a romp every bit as enjoyable and inventive as Fleming’s originals.