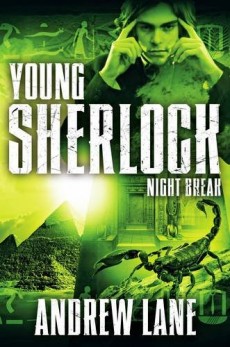 Young Sherlock returns to his childhood home after the death of his mother and trouble doesn’t take long to seek him out when his sister’s fiancé disappears without trace.

Andrew Lane’s young Sherlock Holmes returns for the eighth time. In this latest book in the series, we finally get a glimpse into his background as Sherlock has to return to his family home near Arundel in Sussex following the death of his mother, news he receives with a curious but now almost characteristic lack of emotion.

Back at Holmes Lodge for the first time in several years, Sherlock is reunited with his sister, Emma, a fey young woman who at times has a tenuous grip on reality. But despite that, she surprises him by announcing that she has recently been courting and intends to get married. When asked about their mother’s death, Emma responds by wondering whether the faceless men have somehow spirited her away, leaving Sherlock to wonder about his sister’s state of mind following her bereavement.

That night, Emma wakes Sherlock in the night and announces that there are faceless men in the house – and she proves to be correct. Sherlock finds that the house has been invaded by sinister men, their faces masked with bandages. The intruders had been searching their father’s desk; he’s abroad, serving with the army in India, and neither Sherlock nor his elder brother, Mycroft, have any idea what the thieves were looking for.

When Sherlock and Mycroft decide to pay a visit to Emma’s prospective fiancé, James Phillimore, matters become even stranger when Phillimore vanishes from his own house, leaving Sherlock with a classic puzzle to solve.

From Holmes Lodge to Egypt, Sherlock and Matty set out on a journey that has international ramifications as they attempt to unravel a puzzle that links the disappearances of James Phillimore from his house near Arundel and his brother who was engaged on an engineering project of unparalleled size to dig a canal to connect the Red Sea to the Mediterranean.

Young Sherlock: Night Break is as ingenious as every previous adventure, but here the stakes seem to be even higher and Sherlock is forced to ally himself with his former enemies, the sinister and far-reaching Paradol Chamber. As an aside, I’ve often wondered if Lane is showing his roots in Doctor Who here, with a veiled reference to the time-travelling crime syndicate, Faction Paradox.

Friendship and loyalty are important themes here. Sherlock has to face up to betrayal on a monumental scale from those he’s always believed closest to him, and he takes further steps on the road to becoming the seemingly cold and emotionless man that we know he will ultimately become. There is still so much ahead of him, including the mystery of what is happening to his father in India.