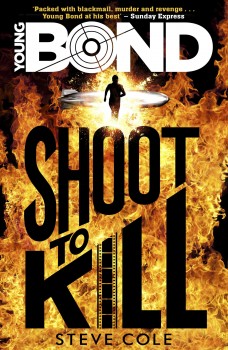 James Bond gets the chance of a school trip of a lifetime on a luxury airship bound for Hollywood, but trouble isn’t far behind him.

After six books by Charlie Higson, Ian Fleming Publications, who hold the rights to James Bond, have now handed the mantle of writing about 007 in his teenage years to Steve Cole, who takes over seamlessly from where Higson stopped six years ago in By Royal Command.

Young Bond, expelled from Eton, is packed off as quickly as possible to school at Dartington Hall, an educational establishment that couldn’t be more different from Eton if it tried! It houses both boys and girls, there are no uniforms and pretty much anything goes. James is not keen on the transition, but his aunt is off to Mexico on business and has pulled in a favour owed by the head, so James has no choice but to do his best to fit in.

Ever a magnet for trouble, James soon makes an enemy of a fellow pupil, Beatrice Judge, whose place he ends up taking on the transatlantic trip of a lifetime, crossing the Atlantic and the USA by luxury airship to Hollywood. Beatrice wants James to pull out of the trip and doesn’t intend to take no for an answer.

On top of this, one of the boys at Dartington Hall wants help returning a canister of film ‘borrowed’ from the local cinema in the hope of viewing some uncensored film clips. But the film turns out to be something far darker as James and his friends watch scenes of apparent torture and death.

Shoot To Kill is a classic Bond story. There’s plenty of action on both sides of the Atlantic, with James getting shot at, chased, beaten up and generally having to use all his resourcefulness to survive. His new friends are an engaging bunch. Hugo, short in stature, is referred to by the period-appropriate description of ‘dwarf’. He’s sharp-witted and well-used to the hurtful comments that his size attracts. Boudicca, known as Boody, is another of the strong female characters that the books have always done so well in portraying, and it’s her, not James, who takes over the job of turning a makeshift air pistol into a serviceable weapon. The descriptions of life on board the airship that carries them all across the Atlantic give an excellent period feel, without ever labouring the point.

On this showing, Cole is more than just a safe pair of hands for the series. His action writing is deft, his characters are well-drawn, including the larger than life villains that are a must in all Bond books, but which do need to be kept out of the realm of total caricature to be believable. James is as inventive as ever when it comes to getting out of trouble and, more importantly, it’s easy to see how the teenager is steadily making the transition to the iconic secret agent he’ll eventually become.