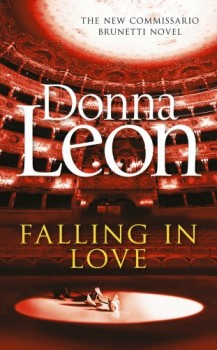 A well-known opera singer is upset when she is inundated with flowers after each performance in Venice. Hundreds appear on stage, in her dressing room and some even outside the apartment in which she is staying. Then Commissario Brunetti is called to see a young woman in hospital who has been attacked. Is there a connection?

Flavia Petrelli is an opera singer who is performing the lead in Tosca at the Opera House in Venice. After each performance a huge number of yellow roses are delivered to her dressing room. She has no idea who is sending them and her concern turns to fear when she finds some roses have also been placed beside the door of the apartment in which she is staying, inside the otherwise locked outer door of the building.

She shares her fears at a dinner date in the home of Commissario Brunetti. Later Brunetti is called to the hospital to try to identify a young woman who has been admitted with a broken arm and cuts to her head. It appears she has been attacked.

This is a gentle plot in which there is a degree of suspense, and opportunity throughout the story for the reader to speculate on the culprit and on what is really going on. A particularly pleasing section is when Brunetti begins to piece all the clues together, to tentatively join up all the ideas he has in this head. And there are one or two red herrings along the way.

The setting of the story is extremely well researched. Knowledge of the opera itself and of the stage and dressing room areas is well used, even down to the intricacies of the way in which parts of the set work. Details about Venice and some of its lesser-known corners are a joy to read with views described that only could come from someone with an intimate knowledge of the city and its people.

Some sections are perhaps a bit complicated to understand. For instance the comment on the blurred videotapes was difficult to follow as was some of the description of the stage set towards the end of the story. Maybe a simpler mechanism for communicating the clues might have been more effective.

However, there are a number of sections that seem to lift the novel onto a different plane. One example is the discussion amongst Brunetti’s family members about the nature of longing and how it can be expressed in speech and writing. Similarly a later reference to Alice being “lost in a forest of words she didn’t know how to escape” conjures up such a powerful image. There is also a section which highlights how two women can work together to make something right and how easy it is for Brunetti to be sucked into complicity.

It is interesting that the vehicle for all this really perceptive psychology is a gentle crime novel. Although it certainly works and is very readable there seems to be something of an imbalance here.