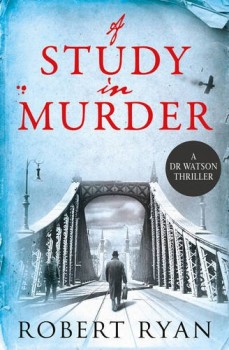 A Study in Murder

Major John Watson is a prisoner of the Germans. A former adversary of Sherlock Holmes, seeking revenge, vows to make him suffer and Watson is sent to a vicious PoW camp in the Hartz mountains. There he uncovers a murderous racket among the prisoners and puts his own life, as well as that of Holmes at risk.

Has Robert Ryan reached the end of the line with his super series on the adventures of Dr Watson, sans, or to a large extent sans Holmes? He has the style off pat, the cunning to produce superbly backgrounded plots and the brio to keep the action bubbling along. But this story is straining the bounds of credulity.

Watson, the ex-Afghanistan veteran, has rejoined the army and is a major. Dead Man’s Land gave readers a graphic description of the horrors of the Front and field hospitals in World War One. The Dead Can Wait was centred on developments in the technology of war and the bitter rivalry between the so-called Allies. At the end of that, Watson was captured, and this story is set against a background of the physical and psychological stresses on prisoners of war.

Several characters from the earlier books resurface, including a deadly female German agent and a devious Winston Churchill, and more, like Holmes’ brother Mycroft, are adapted from Conan Doyle’s work. Basically this is a story of revenge, greed and deep and lasting friendships. Clever as it is, and one or two sections rival the very best of Ian Fleming for invention, the plot is let down by two things.

Given social conditions at the time, a point which Ryan has several of his characters stress, the eventual unveiling of the mastermind behind a PoW murder ring is, to say the least, unlikely. And given the ages of both Watson, in his 60s, and Holmes, possibly older and now suffering from his earlier lifestyle, both are surely a bit past some of the physical excesses Ryan puts them through.

If Watson is to continue, I trust Ryan will cut down on the action-man stuff and instead concentrate on the bluff and decent doctor’s not inconsiderable powers of deduction developed by his long association with Holmes.

Having said all that, it’s still a cracking story, brilliantly paced and in the true Holmsian tradition. And for followers of that, there’s an added bonus. Several times in the course of the book Watson refers an earlier pre-war mystery, The Girl and the Gold Watches, which he is trying to work up into another piece for The Strand magazine.

The result is a clever and self-contained 34-page short story which features Holmes perhaps not at his finest and proving that even the Great Detective doesn’t get it right every time!