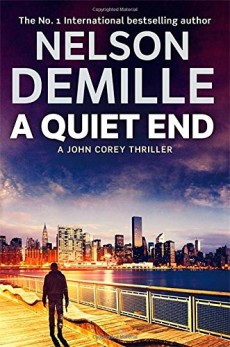 John Corey has recently returned from action in the Yemen as part of the Anti-Terrorist Task Force, and has been asked to resign on the grounds of insubordination. But a dead-end job puts him on the trail of a dangerous Russian.

John Corey has recently returned from action in the Yemen as part of the Anti-Terrorist Task Force, and has been asked to resign on the grounds of insubordination. He is now working in what he regards as a dead-end job in the Diplomatic Surveillance Group.

Corey is parked near the Russian Federation Mission to the United Nations in Manhattan. Accompanied by Tess Faraday, a young trainee whose ambition is to become a special agent of the FBI, he is there to keep an eye on the movements of Vasily Petrov, ostensibly a Russian diplomat at the UN, but actually a colonel in the Russian intelligence service, SVR.

Whilst the DSG has no specific information about Petrov's intentions, he has been placed under surveillance because he is a recent arrival and the Group's guiding principle is to "Watch the new guys." Compared with his time in the Anti-Terrorist Task Force in Yemen, this job is comparatively safe but very monotonous and Corey is not a happy man. As he waits for Tess to return from one of her regular visits to the ladies room, he reflects on the fact that she always seems to be assigned to him and not to one of the other 150 DSG agents in New York. Something, he concludes, is going on.

When Petrov leaves with two others, all of them carrying overnight bags, Corey and Tess follow him and as they do so they talk, during the course of which we learn a lot about both of them, but particularly about Corey. He is a fiercely independent man who realises the importance of his work to the security of the United States and is determined to do it to the best of his ability, even if his interpretation of his duty is not always in accord with the views of officialdom. He has a very acute, though rather sardonic sense of humour, as when he tells someone, “If you’re looking for sympathy you’ll find it in the dictionary between s**t and syphilis.” Tess, however, is more than capable of keeping up with him and gives as good as she gets in their conversations, all of which keep the reader interested and amused.

His tendency to flout the regulations is seen as soon as Petrov reaches his destination – a large and very expensive house, close to a former Indian reservation next to the sea. It turns out the house belongs to Georgi Tamarov, a Russian oligarch. He is holding a wild party and simple surveillance becomes active and potentially dangerous participation when Corey and Tess decide to enter the house, disguised as catering staff. Their surveillance comes to a swift end, however, when an amphibious craft comes up the beach, picks up Petrov and two other men and whisks them out to sea.

After that the novel is concerned with their attempts to locate Petrov – attempts which are redoubled as Corey learns from a former enemy, but a reliable source, that the US intelligence agencies suspect Petrov of planning a crime that is almost unbelievably horrific. The preparation required is in itself shocking but we are made aware that if he is successful, the results will be catastrophic. With help from the US Coastguard and the NYPD, Corey does eventually locate the Russian and, of course, decides to take matters into his own hands. How he does so is the subject of the latter part of the book. Everything up to this point retains the interest of the reader but what follows is totally gripping.

This is the seventh book in the John Corey series and there are indications, as Corey, once again in trouble for insubordination, considers his future, that it could be the last. That would be a pity because this is a hugely enjoyable thriller and there is clearly a market for its rather unusual hero.