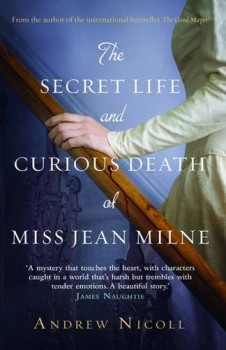 The Secret Life and Curious Death of Miss Jean Milne

The torture and brutal killing of a wealthy spinster in a quiet Scottish seaside town baffles police.

If you like a story that delivers exactly what it says on the cover, this brilliant, atmospheric, Christie-esque piece of ‘faction’ will keep you turning pages right through to its unexpected ending.

Andrew Nicoll, an original, quirky, storyteller, returns to his native Dundee for his fourth novel, rooted in a once twee village, now one of the city’s suburbs. The story is based on the brutal 1912 torture-killing of wealthy spinster Jean Milne in Broughty Ferry. The sense of setting and era are immaculate and Nicoll brings a very human reality to illustrate what could have been a dry recital of names, dates, and places.

Almost all the characters are real and played the parts assigned them. But the triumph of Nicoll’s storytelling is that while staying true to known facts, he manages to show just how adaptable those facts can be, how truth can be made malleable.

The murder, still unsolved, is a gripping piece of history. It was investigated by Detective-Lieutenant John Trench, then famous for the capture of Oscar Slater, but on the verge of destroying his career for exposing the dreadful stitch-ups in that case. The narrator is local Sergeant John Fraser, one of those faithful, truthful, old-fashioned coppers, a perfect right-hand man, who regards the town as his charge and its inhabitants as his flock.

Fraser is a purely fictional character, but a local sergeant was among the first at the murder scene and deeply involved in the inquiries that followed. He sets the tone, a combination of strength and depth you would expect from a man in his position and the clever dialogue between him and the other main characters breathes life into the world they inhabit.

Through his eyes we see the class divisions of the time, the ambitions, faux-piety, pretensions and discontents of small town life. It’s as if he has pulled back a curtain – heavy brocade and from a respectable store, naturally – to expose the darkest corners of a past age and bring us, often uncomfortably, closer to our own sins and shortcomings.

This clever combination, coupled with a lively narrative and a wry and critical sense of humour, carries what is a wonderful piece of fiction through to its plausible, if shocking, solution to the crime at its close. This is a fine story, by an author who has more than a touch of both the style and genius of the Queen of Crime.