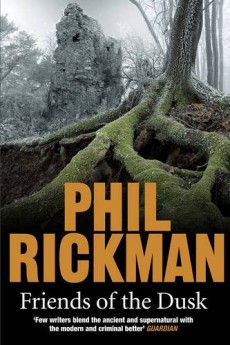 Friends of the Dusk

A severe storm uncovers an unusual burial near the cathedral in Hereford and brings problems for Frannie Bliss, while Merrily Watkins has to contend with a modernising bishop.

A severe autumn storm rages through Hereford, uprooting a tree on Castle Green near the cathedral and uncovering some human remains. The age of the tree means that the burial is of more interest to archaeologists than the police, especially as there’s something odd about the way the bones have been placed, with the head between the legs. It appears to be what archaeologists know as a deviant burial, one that differs from the norm. But then the skull is stolen, leaving the police puzzled and the archaeologists lacking an important piece of evidence.

At the same time, another storm is brewing, this time surrounding Merrily Watkins, diocesan exorcist. Merrily has to contend with a new bishop who seems to have little or no time for anything he sees as a hangover from the church’s medieval past. Despite the new bishop having had some experience in the Deliverance Ministry, he seems determined to shut down Merrily’s additional duties.

When she’s approached by local businessman Raji Khan to help a friend of his, Adam Malik, with something that his imam won’t touch with a ten-foot battle-lance, Merrily knows that if the bishop gets wind of what she’s intending to do, her feet won’t touch the ground as he ejects her from her office. But it’s not in Merrily’s nature to leave anyone to struggle with a problem on their own and she’s determined to help with the problems facing the inhabitants of Cwmarrow if she can.

I’ve been addicted to Phil Rickman’s books, particularly his Merrily Watkins series, for years. I thoroughly enjoyed the recent three-part TV series based on his second book, Midwinter of the Spirit. The casting was spot-on, particularly Merrily’s delightfully foul-mouthed deliverance advisor Huw Owen, and in Friends of the Dusk I could hear David Threlfall echoing in my head every time Huw put in an appearance, generally using some choice language to describe the new bishop.

Rickman’s cast of characters is, as ever, a complete joy. Harassed copper Frannie Bliss is still struggling to hide the effects of a serious head injury and is doing his best to keep his affair with senior officer Annie Howe under wraps. They’re both concerned that Annie’s shady father, Charlie, is a serious contender for the newly-created post of police commissioner. Gomer Parry makes a brief appearance, improbably puffing on an e-cigarette, courtesy of Merrily’s feisty daughter Jane, who’s even got her chain-smoking mother inhaling vapour as well.

Jane is struggling to decide what to do with her life now that her love of archaeology doesn’t seem to have survived a brush with the real world of a rescue dig and a bunch of heavy-drinking blokes. But something else seems to be bothering her, too, and Lol Robinson wants to get to the bottom of the problem. I thought I’d guessed the cause of Jane’s troubles, but then, against all my expectations, Rickman very neatly threw in a curveball, proving that even with 12 previous books behind him, there’s nothing predictable or stale about this series.

No one in the business deals with the spooky stuff better. As ever, there are bags of atmospheric locations, plenty of tantalising snippets of folklore and archaeology and enough spine-tingling moments to keep everyone happy. Rickman doesn’t just tread a careful line between the supernatural and the natural world – he skips nimbly along it with his customary flair! A year seems a very long time to wait for the next book in the series.