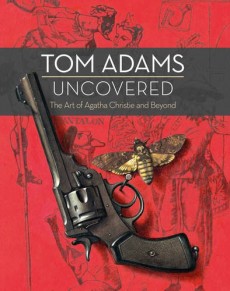 Tom Adams Uncovered: The Art of Agatha Christie and Beyond

The story of artist Tom Adams is told through his Agatha Christie paperback covers from the 1960s and 1970s, as well as a variety of other art and illustrations.

Don’t judge a book by its cover is a cliché that gets trotted out on a variety of occasions, often – unsurprisingly – when talking about book covers. In my experience, authors get little input to cover designs, and if they like them, it’s usually a bonus. If they don’t, there’s generally not a lot they can do about it. The big question is how much notice readers take of covers when choosing a book.

I’ve often picked up a book because I like the cover, only to put it down again when the blurb didn’t interest me. But there are plenty of instances where I’ve not even picked a book up at all if I don’t like the cover and I’ve often read a book and really liked it, despite thinking the cover is dreadful. I’m sure all readers will have had the same experiences.

Despite the many changing fashions in cover design, few are as memorable as the often wholly surreal interpretations produced by American artist and illustrator, Tom Adams. He is probably most famous for his cover designs for Agatha Christie’s paperbacks in the 1960s and 1970s, but he also designed covers for Raymond Chandler’s books and illustrated the hardback editions of John Fowles’ novels, amongst other work. In addition, Adams provided the cover for Desmond Morris’s Manwatching, artwork for Life on Earth by David Attenborough, and produced a book of exquisite paintings of minutely observed aquarium fish.

In Tom Adams Uncovered, Adams has collaborated with author and Agatha Christie enthusiast John Curran to produce an illustrated overview of some of his most famous work. This book is much more comprehensive that its 1980s predecessor, Tom Adams’ Agatha Christie Cover Story, but even so, this is not an encyclopaedia of every cover he’s produced. Each painting is accompanied by a short note from both Adams and Curran, sometimes taking the form of a dialogue between them, which sheds light on what Adams intended with each piece of work. Curran’s insightful commentary provides an added dimension to a volume rich in interest.

My quibbles with the book are only minor. Strangely, for a volume that has its origins in cover art, the majority of what is reproduced here is the original artwork rather than the resulting cover, which for me is the only misstep in an otherwise beautiful and endlessly fascinating book. I would very much have liked to have seen the covers themselves reproduced, alongside the art itself, as a comparison between the two. It would also have been useful to know the year in which each cover was first used.

I am now extremely tempted to delve into the recesses of my attic where I still have my original Christie paperbacks, mostly illustrated with covers that have stuck in my mind ever since, including the splendidly surreal image of a tennis racquet taking the place of a man’s head, emerging from a clerical dog collar and sober, brown suit on the cover of Christie’s The Murder at the Vicarage. I used to enjoy poring over the covers to see if I could spot clues hidden in the artwork, with varying degrees of success!

One thing became clear quite quickly, though. Some things never go out of fashion, especially not creepy dolls’ heads. The US cover of author Sarah Hilary’s second book, the complex and very chilling No Other Darkness, has a creepy doll, with one eye closed, one partially open, the glaze of its skin starting to crackle. This is very reminiscent of one of the UK covers for Christie’s By the Pricking of my Thumbs, which features a doll’s head juxtaposed with images of a tomb and a gravestone. In contrast, the US version featured a red and white rose against the dark backdrop of an old churchyard. For me, the one with the doll’s head wins the scary cover prize by a very wide margin!

For anyone who combines an interest in classic crime with a love of art, this undeniably beautiful and utterly intriguing book is an absolute must.