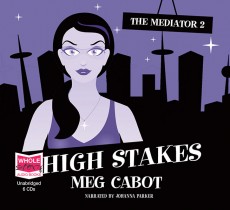 When a hysterical ghost appears in her bedroom in the middle of the night, Suze Simon isn’t terribly pleased, especially when the woman wants a job doing, but doesn’t provide much in the way of helpful information.

High Stakes, first published in the UK as Ninth Key under Meg Cabot’s pseudonym of Jenny Carroll, is the second in the Mediator series, which sees 16-year-old Susannah ‘Suze’ Simon doing her best to get on with her new life – and her new stepfamily – in California.

But she’s still sharing her bedroom with the ghost of Jesse de Silva, who died around 150 years ago, as well as trying to fit in with the sophomore class at her new school, all whilst coping with a bad case of poison oak rash acquired at Kelly Prescott’s pool party. In Suze’s view, the only good thing about the party was getting a slow dance with the very sought-after Tad Beaumont, even if he didn’t seem overly interested in finding out her name!

When the ghost of a hysterical woman appears in Suze’s bedroom in the middle of the night, she isn’t overly sympathetic, and although the woman is desperate for Suze to pass on a message to ‘Red’, reassuring him that he hadn’t killed her, she disappears before imparting any useful information. There are times when ghosts don’t make Suze’s job as a mediator, someone who helps the dead move on with the lives – or rather their deaths – any easier.

Her attempts to track down the person called Red lead her in the direction of Tad Beaumont’s rich, reclusive and distinctly weird father, a man who works in an office with no natural light with the shutters nailed closed, doesn’t seem to eat or drink, and seems to have an unnatural fixation with Suze’s neck.

Suze is as headstrong as she is likeable, with something of a bull in a china shop approach to handling the spirits of the dead. Both her school principal, the more experienced mediator Father Dominic, and Jesse want her to be a bit more circumspect with the ghosts she encounters, but Suze doesn’t believe in beating about the bush, especially when it’s full of poison oak!

In High Stakes, Cabot fleshes out the characters of Suze’s newly-acquired stepbrothers, Jake, Brad and David, nicknamed Sleepy, Dopey and Doc, useful shorthand for each of them. Johanna Parker effortlessly distinguishes between all three of them in a well-paced and very likeable narration, in which she moves as easily between teen and adult as she does between girls and boys. Cabot also deepens Suze’s relationship with Jesse, who’s as infuriating as he is attractive.

There’s nothing predictable about Suze’s adventures and Cabot is adept at leading her audience a merry dance on way to a conclusion that I certainly didn’t see coming.