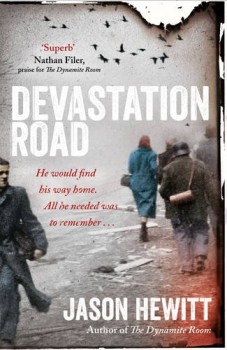 A man awakens bereft of memory, and wanders across a Germany devastated by conflict in the company of two others, both also struggling with the upheavals of wartime.

Emerging from a concussion, Owen remembers little of how he came to be in a German field, of how he is dressed, and even who he is. Memory returns only slowly and patchily, and his survival for the first few days owes greatly to Janek, a teenage Czech boy who attaches himself to Owen for reasons unexplained.

Owen is told that it is May 1945, and the war has ended. He feels a compulsion to get to a place called Sedan; on arrival the pair find a concentration camp, now deserted. They join the stream of refugees making their way west and are soon joined by a young woman, Irena, who is trying to give away a baby she carries in her arms. As the days pass on the road, the stories of all three protagonists are slowly revealed.

This is the second novel by Jason Hewitt, and as with his first, The Dynamite Room, contemporary action is interspersed with the gradual release of backstory so that the lives and behaviour of the actors become fully understood only in the concluding chapters. In The Dynamite Room, the measured release of information was entirely at the service of the author’s decisions on pacing, and at times frustratingly slow. Here it seems more natural, with Owen’s story inhibited by a defective memory, Janek’s imperfect because of  Owen’s inability to understand Czech, and Irene’s concealed by her own design.

There is no doubt of Hewitt’s powers of description, and his ability to convey the desolation of the time and place he chooses for his setting. The stream of humanity seeking refuge, the horror of the camps and the shortage of resources which hampered the work to save the occupants are all believably depicted. His ability to build small scenes and details which bring alive the wider reality is impressive.

His group of actors are entirely convincing: Owen, who followed his admired older brother into active service but carries the guilt of betrayal, Janek, also fixated on an older brother, and Irena, convinced she must change her past if she is to have a future. None are necessarily likeable, but the challenges they have faced are presented so starkly that it is difficult to avoid having sympathy for them.

Hewitt has clearly done the research to furnish his tale with accurate background detail, against which he has created human stories which bring the period alive. If you are in the market for quality writing, and a thoughtful exploration of the ways war can mess people up, this might be for you.