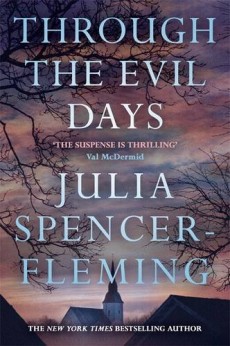 Through The Evil Days

During an ice storm, police chief Russ Van Alstyne and his wife, Episcopal pastor Clare Fergusson, battle a brutal drugs gang and corrupt law enforcement officers in a deadly chase to track down a seriously ill little girl, kidnapped from the scene of a double killing.

In the eighth of the series, upstate New York police chief Russ Van Alstyne and his new wife, Episcopal pastor Clare Fergusson, who finally wed in One Was A Soldier must battle the biggest ice storm of the century, a brutal crystal meth gang and corrupt law enforcement agents to trace a seriously ill little girl, kidnapped at the scene of a double murder, who will die within days without treatment.

Russ and Clare have enough problems of their own. On the day they should leave for a delayed honeymoon, both learn their jobs are in jeopardy. Clare is also pregnant and Vietnam vet Russ is struggling to cope with the idea of fatherhood.

A house fire that turns out to be arson, set to disguise the double killing and kidnap, stretches the resources of the Miller’s Kill police to the limit, while at their lakeside cabin the newlyweds become involved with members of a crystal meth-producing gang who appear to be linked to the crime. Back in the township, young officers Kevin Flynn and Hadley Knox pursue the missing child investigation from another angle while trying to ignore their rapidly rekindling relationship.

Although Julia Spencer-Fleming writes beautifully and her descriptions of a vicious Adirondack winter storm are both graphic and chilling, this may be a book too far. The plot and sub-plots are overly complicated and rest largely on a lack of communication – always a weak device – and after the action is over there is still a series of unanswered questions.

The conflicts between the settled Russ and his more volatile wife and the much younger Kevin and Hadley could occupy an agony aunt for months, and this mixture of personal lives and some fairly steamy sex with a series of brutal crimes somehow fails to grip the imagination. Marge Proops does not mingle well with Bruce Willis, Lassie and Jilly Cooper.