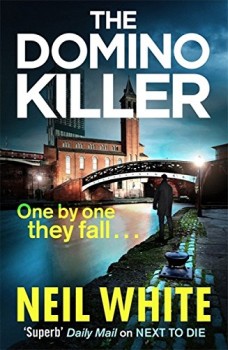 Joe Parker finally comes face to face with the man he believes is responsible for his younger sister’s murder.

When a man is found beaten to death in a park, Manchester copper DC Sam Parker is left trying to unravel a whole series of things that don’t make sense. The man was carrying a bunch of flowers, but no one has any idea who he was intending to give them to. And, even stranger, his fingerprints come up on file as having been found on a knife used as a murder weapon a month earlier.

Sam’s brother Joe, a criminal defence lawyer, is called to represent a man charged with the rather strange crime of stealing his own car from a police compound. Joe is certain that his new client is the man he’s spent years looking for – the murderer of his teenage sister, killed the day Joe turned 18. Ever since her death, Joe has blamed himself for letting her walk to her death down a lonely pathway, keeping to himself the knowledge that he saw the man who was probably responsible for her death.

Now he’s finally come face to face with the man he went into the law in the hope of finding, Joe is faced with the dilemma of what to do next. He’s wanted this opportunity for so long, but reality is very different to the dreams of revenge he’s harboured for so long.

In the third book featuring the two very different Parker brothers, Neil White draws together the strands woven through his two previous books, Next To Die and The Death Collector, and provides a welcome measure of closure for both his characters and his readers. The three books have all delivered good, solid plots and believable characters, and The Domino Killer is no exception, although there were times when I found myself floundering as I struggled to grasp what the hell was going on.

All does become clear, though, as White employs the now almost inevitable ‘breakfast at Southfork’ moment so beloved of Dallas scriptwriters when the characters sit down and discuss the plot, thereby tying up all loose ends. But on this occasion, I was quite glad of it!

As White has now changed publishers again, I suspect this is the last we’ll see of the Parker brothers, but it’s been a good series and one that’s well worth following. There’s sometimes a lot to be said for a series that has a beginning, a middle and an end, and doesn’t stretch the characters and linking plots to breaking point.