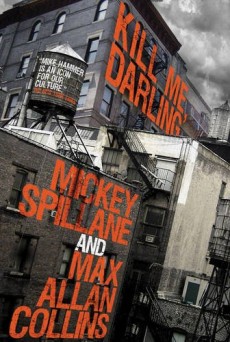 PI Mike Hammer, on a massive drinking binge after girlfriend/secretary Velda leaves him, apparently for a gang boss, heads for Miami after the murder of the police captain who brought them together.

What can you say new about Mickey Spillane? The first and the best noir writer before Scandi-misery, let alone the violent Scots, came along!

This is the 20th Mike Hammer story, the first 13 published in Spillane’s lifetime and the last seven a collaborative effort based on his notes and outlines and Max Allan Collins’ creative finishing. This one is more Collins than Spillane, but can you tell the difference and does it matter?

It’s got all the necessary ingredients: Hammer, his – and a lot of male readers’ – dream-girl, Velda, and the ever-reliable Pat Chambers, swift and final justice for a lot of very nasty characters, some swift 1950s’ dialogue and plenty of black humour and classic one-liners.
Just another Hammer must-read!

Collins admits this one owes much to The Girl Hunters, mixed with another fragment, but who cares about the mechanics when the result is so good? Hammer has crawled back inside the bottle after Velda leaves him with just a two-word goodbye note. Chambers rescues him after Mike learns of the murder of the old police captain who had brought them together. Pat also has news of the missing Velda. She is in Miami, apparently the girlfriend of a rapidly rising and vicious criminal boss with Family connections.

Chambers believes the two events are somehow connected and a convinced Hammer sets off for Florida, suffering the agonies of drying out as he heads south. Having done some basic legwork it is not long before he clashes with the new man. But even he is surprised when four elderly Mafia Dons try to hire him to kill the gangster who threatens the peace of their family winter holiday homes with a plan to use Florida as the main import point for drugs.

From there on Hammer leaves his usual trail of bodies – except for those the sharks get to eat – as he outsmarts and outshoots a string of lowlifes, eventually exposing police corruption and a potential Mafia family war. In part a historical mystery, Collins is writing about the early 1950s before America was swamped by a tidal wave of drugs. He paints a convincing picture of Miami, its swanky hotels, clubs and homes and its reputation as a honeymoon and retirement city masking a seedier and far more dangerous side.

It’s effectively done. The sun-drenched pastel shades we would later become used to in the hit TV series Miami Vice are brought dramatically to life. The plotting is tight, the action brutal and there is a nice twist ending which makes this yet another Hammer classic.
Titan deserve credit, as well as profit, for bringing these iconic stories to a new generation as well as keeping millions of us older Hammer fans happy.