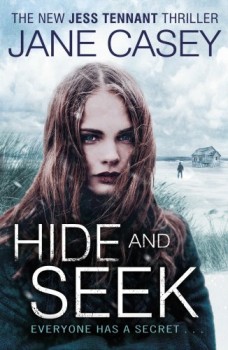 One of Jess Tennant’s classmates has gone missing. Jess is warned to keep her nose out of police business, but she’s not going to let Inspector Dan Henderson cramp her style, even if he is her boyfriend’s dad.

Jess Tennant is back, and as usual she’s up to her eyes in trouble, much to the concern of her boyfriend Will, and even more to the annoyance of Will’s father Dan, the long-suffering and distinctly intimidating police inspector in the picturesque village of Port Sentinel. Dan would much prefer it if Jess kept her nose out of police business and Will would much rather she spent more time with him, without being distracted by other people’s problems. But staying out of things isn’t what Jess is good at.

When one of the girls from her school goes missing after Jess has seen her being bullied, she wants to know what has happened. The fact that she was due to meet Gilly in the local library to work together on a school project, gives her the perfect excuse to go around to the missing girl’s house and talk to her mother. Unsurprisingly, neither Will nor Dan see things that way, especially not when they discover that Jess took the opportunity to walk away with Gilly’s diary, and Jess’ claim to have seen a bloodstain on a wall doesn’t cut much ice, either.

Jane Casey’s great strength lies in her ability to create wholly believable characters of all ages, and she never resorts to hitting them with the stupid stick for the sake of the plot. Yes, there are times when Jess’ impulsive nature gets her into trouble, but I never wanted to reach into the page and shake her. I’m a total sucker for situations where antagonists are forced by circumstances to work together, and that’s another area where Hide and Seek pushed a lot of my buttons.

Dan Henderson was a favourite of mine from his first appearance in How to Fall, and Bet Your Life only cemented my liking for him. He’s abrupt and more than a little menacing, and I’ve never been wholly sure whether he’s on the side of the angels or not, and neither is Jess. Equally attractive is local heartthrob, Ryan, once Will’s friend, but now very definitely not. Jess likes Ryan’s easy-going nature, and it’s hard at times not to make Will jealous. But when the chips are down, all Casey’s bad boys are capable of some surprises.

There’s nothing predictable about the plot in Hide and Seek, either. What at first appears to be a deceptively simple story of a missing girl proves to be anything but straightforward. The climax was both unexpected and very, very tense. I really wouldn’t have laid any bets on how it was all going to turn out.