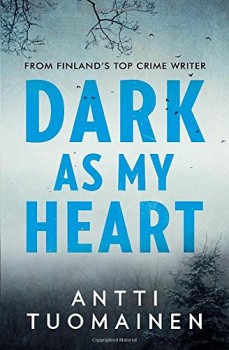 Dark As My Heart

Aleksi’s mother disappeared without a trace when he was only 13. Twenty years later he is convinced that a charismatic millionaire Henrik Saarinen has murdered her.

Aleksi Kivi lost his mother Sonja on a rainy October day when he was 13 years old. He didn’t know his father, so following her vanishing he is completely on his own, forced to move between foster homes and unable to feel safe. But he manages to train as a skilful carpenter.

Twenty years later he is convinced that he knows who was responsible for his mother’s death as murder seems to be the only explanation of her disappearance. As Aleksi has been analysing and interpreting almost insubstantial clues and signs most of his adult life, everything seems to point to the charismatic powerful millionaire Henrik Saarinen.

Over the years Aleksi has forged a delicate relationship with doubtful but caring police inspector Ketomaa, but his reasoning falls on deaf ears and the police don’t agree with it. So Aleksi realises that he has only one option: to get close to Saarinen and find out the truth about his mother. He succeeds in securing a job as a caretaker on the millionaire’s country estate, west of Helsinki, where only a cook and a driver are employed.

There he meets alluring Amanda, Saarinen’s daughter. However, Aleksi soon discovers that delving into their family’s secrets can become a confusing and dangerous enterprise. Getting involved with Amanda costs Aleksi his fragile peace of mind, and the emotional wall he’d built around himself starts to crumble. He is being pulled into some mental games, although he does not fully understand that.

The mesmerising atmosphere of the peaceful stunning seaside Kalmela Manor contrasts with the busyness of Helsinki, and brings mysteries of Aleksi’s own life into the surface. And he cannot help but be attracted by the magnetic personality of Saarinen…

Antti Tuomainen, author of the Finnish sci-fi apocalyptic crime thriller The Healer, set in Helsinki in dystopian future, sets Dark as my Heart in a more defined time frame, moving between October 1993 and November 2013.

It is not a classic whodunit but a terse psychological thriller played within a setting of family drama. Dark as my Heart is a surprising and thrilling story, with touches of unexpected violence. It creates a unique world where a small number of characters make this a very uneasy, almost suffocating environment. The author builds up the tension that slowly becomes unbearable for Alexi and palpable for the reader.

Tuomainen’s style combines raw poetry with truly disturbing terror. He masterfully creates settings and develops characters while pondering on the meanings of vengeance, obsession and the search for justice.

The book has been voted the best Finnish crime novel since 2000. It has been thoughtfully translated by Lola Rogers who conveys beautifully the poetic atmosphere of peace, mixed with the horrendous crimes from the past and tense anticipation of a new murder.