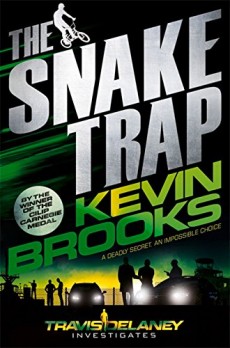 Travis Delaney has been kidnapped by terrorists and has to work with a man he hates in order to survive.

I’m a great fan of Travis Delaney, Kevin Brooks’ tough, quick-thinking 14-year-old, and have followed his progress through The Danger Game and The Ultimate Truth. The Snake Trap picks up where the last book left off, with the detonation of an M84 stun grenade in the offices of Delaney & Co, Private Investigators. Brooks certainly knows how to start a story off with a bang!

Travis and Winston, the man Travis believes was responsible for the death of his parents in a car accident, are taken hostage by ruthless terrorists from a group known as al-Thu’ban, a breakaway group from Al-Qaeda, and Travis has to come to terms with the fact that he’s very unlikely to escape their clutches alive.

With the help of – and occasional hindrance from – MI5 and their equally ruthless Strategic Operations division, Travis’s Grandad and his colleagues Gloria and Courtney are determined to get him back alive, but that will all depend on MI5’s willingness to negotiate with al-Thu’ban and on whether the terrorists can be trusted to keep to their side of the bargain. Set against a backdrop of dislike and distrust on all sides, Travis’ future looks bleak.

Considering that Travis spends much of the book chained to a pillar in a basement, he still remains front and centre to all of the action as Brooks cleverly contrives to maintain him as narrator throughout, even for scenes where he’s not physically present. It’s a device that by all conventional wisdom shouldn’t work but, much to my surprise, Brooks pulls it off with consummate ease, and the shifts from what Travis is experiencing directly, to his role as almost omniscient narrator are almost unnoticeable.

Much to my delight, Travis’s friend Mason Yusuf from the down-at-heel, no-go area of the Slade Estate and his minder, the massive, silent Big Lennie, play a pivotal role in The Snake Trap. Mason’s younger sister, Jaydie, is being threatened as a means to control Travis, bringing out Travis’s loyalty and protectiveness, even at the possible expense of his own life.

I spent the vast majority of the book with absolutely no idea how – or even whether – Travis was going to escape. Brooks pulls no punches when it comes to delivering the hard knocks, both to his characters and readers, and I flinched on quite a few occasions. Travis is forced to confront deeply-held hatreds and find a measure of peace both within himself and those he counts amongst this enemies. The portrayal in particular of a young woman known as Issy, one of his captors, provides a brutal backstory for how radicalisation can happen that’s all too current in today’s climate of fear as the situation in the Middle East deteriorates on an almost daily basis.

This is quality young adult writing with well-drawn characters, tightly plotted action, and real, vividly-portrayed moral dilemmas. As in real life, there are no absolutes here, just some very murky shades of grey.