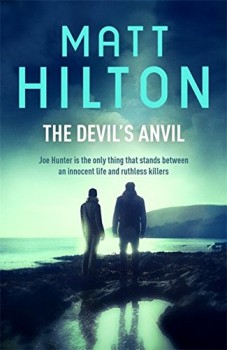 Billie Womack’s ex-husband stole $80 million and the people he stole it from think she’s the key to getting their hands on the money. It’s Joe Hunter’s job to keep her safe.

In the tenth book in Matt Hilton’s Joe Hunter novels, our hero is back again doing what he does best, protecting someone from bad guys. The person who needs protecting is Billie Womack. Her daughter Nicola died when the car she was in, driven by her father, Billie’s former husband, went off a bridge into an icy river.

For the past four years, Billie has been quietly getting on with the difficult business of putting her life back together. She lives beside a lake, making a living from her paintings, but then one day, she gets an unwelcome surprise when she comes home to find a man waiting on her porch. He claims he’s an agent with the Federal Bureau of Alcohol, Tobacco and Firearms and tells her that he believes her husband Richard is still alive and, to make matters worse, that he faked his own death, killing their daughter in the process, to help him cover up the fact that he’d stolen $80 million.

Despite Billie’s disbelief, Agent Brandon Cooper does his best to convince her that at least some of the corporations Richard Womack has filched money from were the sort of people you very definitely didn’t want to cross, particularly and outfit called Procrylon. He’s convinced they’re going to want to retrieve their money, and tells Billie that she really doesn’t want to be on their own if they come calling. He leaves her with Joe Hunter’s name and number.

The Devil’s Anvil jumps headlong into the middle of the story with an action-packed pursuit in the middle of nowhere, culminating with what seems to be a sticky end for Hunter. It was certainly an effective way of grabbing my attention, even though I never seriously though that Hunter was dead, although I will admit to a small, burrowing worm of doubt…

Hilton does what he excels in this book, and pits Hunter – plus some entertaining and unlikely allies – up against the massed ranks of the baddies. There’s plenty of heart-in-the-mouth action, smart dialogue and convincing extras – including my favourite, a very laid-back driver, more bothered about the fate of his jacket than about the gun that’s being pointed at him.

Billie Womack proves once again that Hilton has now mastered the art of writing convincing female characters, especially when he makes no attempt to put them on a pedestal, which was a minor failing in the first few books. Billie is an extremely tough cookie, especially during a torture scene that had me reading from behind the back of the sofa. The bad guys are bad, but always believable, and Hunter also stays firmly grounded, even during his occasional Jack Reacher moments. But give me Joe Hunter over Reacher any day. He’s definitely the bloke I’d want watching my back in a tight spot, and at least I wouldn’t have to worry about when he last changed his underwear!