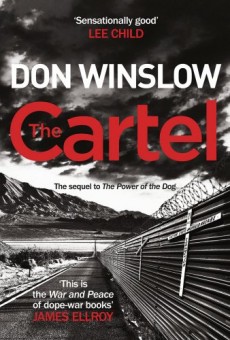 When drug overlord Adán Barrera is allowed to escape from a Mexican prison, the man who put him there, DEA agent Art Keller, vows to do whatever is necessary to bring him to justice again.

Whilst it is true that The Cartel is a sequel, it is by no means necessary to have read Don Winslow’s previous novel, The Power of the Dog. The Cartel is completely self-contained – the only thing we need to know being that this story of the pursued and the pursuer had its origins some years before the beginning of the action. In fact, it appears to be not so much a sequel as an almost inevitable second part as it continues the account of that pursuit.

Adán Barrera, head of the Sinaloan drug cartel, is facing a very long sentence in the Puente Grande federal prison near Guadalajara. At least that is one view of his situation. Another view is that he can escape whenever he finds it convenient to do so because the guards are largely corrupt and have been well paid. He virtually runs the prison and does more or less what he likes there, including living and sleeping with Magda, a very beautiful woman prisoner, with whom he has fallen in love.

One day he decides that the time is right for him to leave, the doors mysteriously open and he and Magda are gone. Art Keller, veteran DEA agent, is horrified when he learns of Barrera’s escape and determines that he is either going to bring him to justice or – if he gets the opportunity - kill him.

The novel is concerned with Keller’s long and tireless hunt for Barrera, during the course of which we are presented with a picture of life – and death – in the Mexican drug cartels and particularly in those towns on the US/Mexico border which are the channels for drug smuggling. Even when in prison, Barrera has remained the leader of the most important cartel, El Federación, and the fact that he is free to head it once again is a signal for the other cartels to assert themselves against him and each other.

The way in which the war among the cartels is pursued is the stuff of nightmares, involving torture and the most gruesome methods of killing, frequently including the cutting off of limbs and beheading. Nor are such acts restricted to opposing gang members. Any member of the general public who dares to speak out against the cartels is likely to suffer the same fate. Men, women and children are victims as each cartel tries to silence any opposition. The police and the army both appear to be in the pay of the cartel, bodies are found in the streets every morning, social and commercial life has disintegrated and many people feel they have no option but to leave and seek safety over the border.

One description of this novel might be ‘thriller’ and it is certainly that. The plot is intricate, one event after another bringing its own suspense without any deviation from the main them – the manhunt. We are introduced to an 11-year-old boy who has become mixed up with a cartel and is being trained as a killer. In the broken-down remnants of Juarez, deserted by a police force unable or unwilling to cope with the lawlessness, a 19-year-old girl volunteers as a policewoman, in spite of her being the only one in town. There is an unknown blogger who constantly publishes anti-cartel material, in spite of the knowledge that discovery will mean a death sentence. A newspaper editor and his reporters refuse at first to be cowed by the threats to their lives and try to preserve the freedom of the press in the town.

Keller is constantly trying to read Barrera’s mind and looking for ways and means to trap him. Whilst there is excitement on every page, the novel ends with a riveting chapter in which the hunted and the hunter come face to face. Of course, the reader knows from the outset that the confrontation will take place but when it does it provides a climax most crime thrillers can’t even begin to approach.

In fact, what makes the novel exceptional in this genre is that it is so much more than a conventional thriller. It forces us to consider the meaning of humanity and of inhumanity and serves as a warning of what might happen on a universal scale if the problem of drug dealing remains unsolved. There is much in the novel to suggest that what is called ‘the war on drugs’ cannot be won. The money to be earned from the trade is such that for every cartel member killed there is always somebody willing to take his place.

Moreover, it is all too easy to condemn the Mexican cartels as inhuman, barbarous animals, but would they not cease to exist without the constant demand for their product from the United States? There are people like Keller, disillusioned and despairing of change, who are aware of this simple fact, but there are politicians who are not and who will keep coming forward with ‘solutions’ that will have no effect. Add to this the fact of widespread corruption of people in authority and the future looks bleak indeed. Don Winslow has performed a public service in bringing the situation to our attention in such a graphic way.