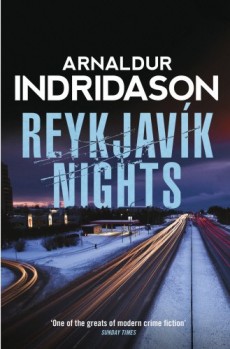 A homeless alcoholic man is found drown in a shallow pond on the outskirts of Reykjavik. A young woman disappeared while walking home from a club. Erlendur Sveinsson is just a traffic cop…

Throughout the whole series Arnaldur Indriðason has created and firmly established Erlendur Sveinsson, the brilliant but melancholic detective. The prequel, Reykjavík Nights, in fine and sensitive translation by Victoria Cribb, is a journey back in time. The king of Icelandic crime fiction paints a picture of an early stage of Erlendur’s professional life in Reykjavik in 1974 when Iceland was celebrating the 1100th anniversary of its settlement.

We are introduced to the young traffic officer, not yet a detective, working night shifts. During the summer he is on patrol with two law students, Gardar and Marteinn. The small compact capital is full of car crashes, robberies, drinkers and fights, and Erlendur witnesses ‘human dramas that were hidden from others’: homelessness, alcoholism and domestic violence.

So when Hannibal, a homeless man, is found drowned in a shallow pond in the peat marshes, and a young woman, Oddny, vanishes on her way home from a club, few people care. Both cases seem of no importance and aren’t given any attention as these are just two lost people from two different worlds.

However, Erlendur is drawn into the mysteries and dramas of those mysteriously missing. Although not working as an investigator, his instincts tell him their fates are worth pursuing, especially as he has befriended Hannibal, a desperate hopeless alcoholic, during his walks around town. He investigates the secrets of the city’s underbelly, meets friends and family members, other homeless people, and relies on any possible tenuous links but most importantly on his gut feeling. This eventually gets the attention of Marion Briem, his older colleague and mentor.

The book also offers the first proper insight into the domestic/private life that later resulted in much sadness and heartbreak, and shaped most of Erlendur’s adulthood. Although he moved to Reykjavik years ago he still feels an outsider, belonging to a different time and different area, as a man from the rural East Fjords in Iceland.

A loner by nature, and working under the police radar, Erlendur’s need and determination to find the fates of Hannibal and Oddny affects his relationship with his girlfriend Halldora, who later becomes his wife. Erlendur’s fear of personal commitment stems from childhood. This young man is still grieving for his younger brother who disappeared in a snow storm, and is living in guilt that he had managed to survive. Traumatised by these events, Erlendur is seen as gloomy, stubborn, miserable and obsessive. However, he is also a brave lion-hearted man, constantly trying to atone for the past. This constant conflict makes a truly iconic character, and Indriðason’s genius offers opportunities for the reader to think and decide...

Reykjavik Nights provides a great introduction to Inspector Erlendur Sveinsson but Indriðason’s books do not need to be read in order. The effortlessness of narration always forms the basis for the emotionally rich but measured story, and very strong sense of place/location takes the reader into an ever-changing Iceland.