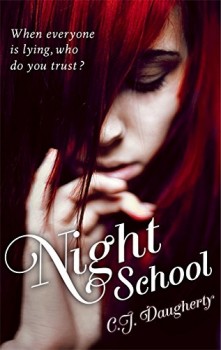 When teenage rebel Allie Sheridan is arrested for the third time, her parents have had enough, and she’s packed off to the exclusive and mysterious Cimmeria Academy, where nothing is quite what it seems.

Allie Sheridan is the epitome of a troubled teenager. Her brother has disappeared, seemingly of his own volition, and Allie is kicking against her parents, her school and society in general. When she’s caught breaking into school, along with a couple of friends, to daub rude graffiti on the wall and is arrested – again – it’s the final straw.

Against her wishes, her parents pack Allie off to a boarding school in the middle of the countryside. Mobile phones, computers and contact with the outside world are all banned. She’s allowed phone contact with her parents under strict supervision, but Allie is in a massive strop and is determined to maintain radio silence.

With her dyed red hair and heavy make-up, Allie stands out like a sore thumb, but has no choice other than to trade in her favourite knee-high lace-up boots for sensible shoes and a neat school uniform. Cimmeria Academy imposes a strict regime on its students and any infringement of The Rules is strictly punished.

The other students seem, almost without exception, to have rich, powerful or famous parents, often a mix of all three, and the majority also have parents who went to Cimmeria, so no one can work out what strings Allie’s parents pulled to get her in there at short notice in the middle of the term.

Allie feels like a fish out of water but, much to her own surprise, she starts to make friends. And there is plenty of scope for romance: there’s brooding, good-looking Carter and the charming but unscrupulous Sylvain, and they aren’t the only ones.

But of course there’s a dark side of Cimmeria Academy as well, in the form of the secretive and somewhat sinister Night School, the elephant in the room that no one is allowed to discuss. Night School pupils get extra tutoring, and it’s certainly not in French or maths!

CJ Daugherty’s publicist warned me that the series was addictive, and never has a truer word been spoken. I was sent all five, and decided to start at the beginning. I’m certainly glad I did, as I have been galloping through them with positively indecent haste! The books are told from Allie’s point of view, and she’s a very easy character to identify with. She’s tough, feisty and eminently likeable.

I was brought up on school stories, but none of them ever had Cimmeria’s dark, sharp edge. Take a bunch of enterprising teenagers, add a dash of mystery, throw in some suspense and intrigue, season with murder to taste, shake well and you have the perfect mix. This is an area where things have moved on a hell of a long way from Enid Blyton and Angela Brazil!