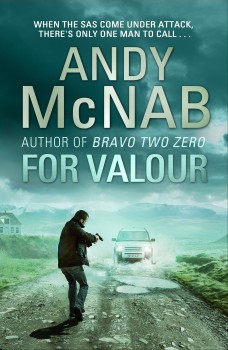 When a young trooper is shot in the head during an SAS exercise, it seems a clear-cut case of the negligent discharge of a weapon. But that doesn’t stop Nick Stone wanting to do some digging, especially as the accused soldier is the son of a close friend.

My predilection for what my co-editor refers to as ‘willy-waving thrillers’ is probably well known by now, so it might come as some surprise to discover that this is the first time I’ve made the acquaintance of Andy McNab’s ex-SAS main character, Nick Stone. But after galloping through his latest offering, For Valour, I suspect this won’t be my last outing in his company.

A young soldier is shot in the head during an exercise in the Close Quarter Battle House in the SAS’s headquarters near Hereford. Live firing drills in the Killing House, as it is more usually known, aren’t exactly safe, but this seems to be a clear-cut case of the negligent discharge of a weapon, and Sam Callard, the man believed to have fired the fatal shot, is promptly whisked off to the military detention facility at Barford, pending trial.

But not everyone believes he’s guilty and when one of Stone’s oldest friends is spooked enough to engineer a meeting in the depth of the Black Mountains, he starts to wonder what’s been going on. When deaths start to mount up, Stone is plunged deep into some very murky waters.

The story careers around the world like a ball in a squash court, from Russia to Wales, juxtaposed with Spain, Scotland, Serbia and Cyprus. McNab’s sharply observed descriptions create a rapid but always grounded sense of place wherever Stone fetches up. There’s plenty of his trademark gun stuff, but never too much detail as to overwhelm the story. The characters come rapidly to life – and equally rapidly to death – and I felt I’d known Stone much longer than just this one book.

This is a dark book that takes a look behind tales of military heroism to the world of pain and death that professional soldiers inhabit where events on an Afghan hillside, a posthumous Victoria Cross, and a young soldier’s increasing fragile mental state all combine to produce an explosive situation that some feel must be concealed at all costs. As ever, McNab writes convincingly of a dangerous world that most of us only know through the safe medium of TV and newspaper reports.