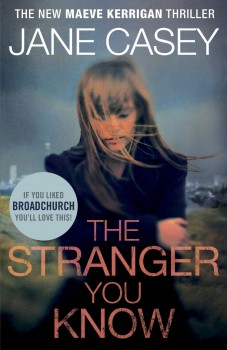 The Stranger You Know

A serial killer is at work, and there are echoes of a cold case from 20 years ago. Maeve Kerrigan is shocked when suspicion falls on her obnoxious colleague DI Josh Derwent.

DC Maeve Kerrigan is back for a fourth outing in a series that is very definitely going from strength to strength. Three women have been brutally murdered, their bodies horribly mutilated and laid out in such a way that makes it clear that a serial killer is at work.

Kerrigan is pleased when Detective Chief Superintendent Godley wants her to be involved in the team hunting for the murderer, but she’s puzzled and uncomfortable when she’s forced to be piggy-in-the-middle when Godley makes it plain that her partner, the ever-obnoxious but equally charismatic and brilliant Detective Inspector Josh Derwent, is very definitely not to be involved in the investigation.

Derwent, never a man to take a setback lying down, is equally determined to find out what’s going on, especially as one of the people who’s standing in his way is DCI Una Burt. The antipathy between the two is marked, and tension in the team is ramped up further by Kerrigan’s distrust of Godley, a man she initially admired, but that fell apart when she discovered in a previous book that he is in the pay of a notorious gangland boss.

Kerrigan discovers that the reason Derwent is being kept out of the investigation has its roots 20 years ago, when his girlfriend was murdered and suspicion fell on him. There are strong similarities to the current cases and suspicion naturally falls on Derwent. Despite his obnoxious behaviour to her and all and sundry, Kerrigan refuses to believe he’s a killer and she’s drawn into his attempts to clear his name even though she knows she’s acting strictly against orders and putting her career very definitely at risk.

One of the best things about Jane Casey’s series is the way she consistently and believably develops her characters. The relationship between Kerrigan and Derwent has always been at the heart of the books, and in The Stranger You Know, boyfriend Rob Langton takes a backseat, being shunted off to a course in the United States, and thus kept off stage for all of the action, ensuring that the focus of attention is definitely Derwent, easily one of the most consistently interesting protagonists around at the moment. Kerrigan herself is the same mass of insecurity she’s been throughout the books, but she’s also interesting in her own right: intelligent, loyal and intuitive.

Plot strands from earlier books weave almost imperceptibly though The Stranger You Know, never dominating the storyline, but simply forming part of the pattern for the future. Casey handles characterisation and plot skilfully and this is without a doubt a series to watch out for.