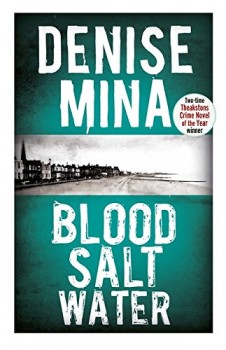 The body of a woman surfaces in Loch Lomond. DI Alex Morrow must tie the crime to a drugs and money-laundering ring, the disappearance of a second woman and deadly tensions in what seems a chocolate-box town.

One of the best of contemporary British crime writers, Denise Mina’s great strength is that she never allows her intelligent stories to break the bounds of possibility. While many writers rely on psychotic serial killers – in reality a rare occurrence – and complex and near voyeuristic descriptions of their crimes, she sticks close to modern criminal life. Loan sharking, protection, drugs and money laundering are her chosen offences, all of which can – and do – escalate into killings.

Equally, her police officers are deeply rooted in reality. DI Alex Morrow is as hard as the scum she hunts – you often get the impression she misses the old days when kiddy-fiddlers and wife beaters ‘slipped on a wet floor’ on the way to the cells – but she is anchored in humanity by her cleverly-described family life.

Mina is also astutely perceptive about human nature, whether it be internal police politics or the intricate and psychologically complex backgrounds of some of her characters. Her books are beautifully written and plotted, and the story for this fifth of the Morrow series, is, as always, strong. The body of a woman surfaces in Loch Lomond. Morrow must tie the crime to a drugs and money laundering ring, the disappearance of a second woman and deadly tensions in what seems a very middle-class community.

Blood Salt Water is given an extra urgency by its setting – the final run-up to the often bitterly contested Scottish independence referendum – and is a sometimes grim, but thoroughly engrossing look at the darker side of what appears on the surface to be a chocolate box town. All the contradictions and inbuilt problems of Scottish society, rich v poor, kirk v catholicism, town v country, are there. But the participants in this series of clashes are always human and never one-dimensional.

One, Roxanna Fuenticilla, never appears at all, except on surveillance footage as both Police Scotland and the Met attempt to link her to a multi-million money laundering scam. But by the time she disappears, we have a surprisingly intimate picture of her.

In a convoluted plot full of troubled souls and tortured minds, Mina’s villains are all too human – although I take issue with her attempt to make a sympathetic character from a recidivist hard man and killer – as the story evolves through a series of emotional and edgy twists towards a surprise ending.