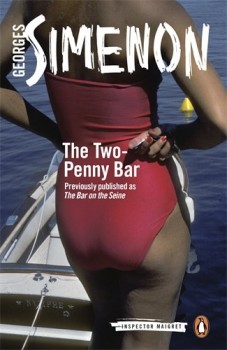 The night before his execution, condemned man Lenoir tells Maigret of a murderer he was blackmailing – a man who was recently seen at a two-penny bar.

The night before his execution, condemned man Lenoir tells Maigret of a murderer he was blackmailing, a man who dropped from sight but was recently seen at the two-penny bar.

Maigret is given insufficient details to take the matter further, but when some weeks later he hears a man say he will be joining friends at the two-penny bar that day, Maigret abandons his promise to join his wife at her sister's, and gives chase. The eponymous bar turns out to be a small establishment by the Seine out of town, where a group of regulars gather at weekends for a convivial time fishing, boating, drinking and dancing.

Despite his identification as a policeman, the group are happy to accept Maigret, who in typical style says little and absorbs the undercurrents in the company around him. Things take a dramatic change on the following day, however, when a shot is heard and Basso, a leading figure in the group, is found standing over the body of Feinstein, holding a pistol.

Maigret is already aware that Basso was having an affair with Madame Feinstein, known as Mado, so there is an obvious explanation. But Maigret is not persuaded, and when Basso escapes arrest he becomes even more convinced that recent events are tied up with another crime committed several years ago.

This is an early Maigret in re-issue by Penguin Classics, first published in 1932. The book is early enough for Maigret to give illuminating commentary on his experience of the way cases progress: 'Firstly, coming into contact with a new environment...a little world that something had shaken up...(which) he would enter as a stranger...for Maigret...the most exciting part...(where) he would sniff around... (and) observe people's reactions...Suddenly he would get a lead and ...the pace would quicken.'

The initial stage of the current case brings him into contact with two characters to whom Maigret has different reactions. James is a good friend of Basso, a heavy drinker, and someone who Maigret finds sympathetic: he ends up meeting James for drinks on a daily basis notwithstanding James's barely concealed attempts to assist Basso elude recapture. In contrast, when Lenoir's old associate Victor turns up hoping to reinstate the blackmail, Maigret identifies him as a parasite, one of the lowest and worst types he has to deal with, and is thoroughly hostile.

Perhaps it is this sensitivity to class which really dates the book, and not the occasional reference to horse-drawn coaches and oil lamps. Without giving too much away, at the end of the book Maigret is prepared to manipulate the evidence to relieve a 'deserving' character of the consequences of his actions, only to have the man insist on taking his punishment. These days the middle class tend to be viewed less sympathetically, and it is those with the disadvantages of a deprived upbringing who are viewed as more deserving.