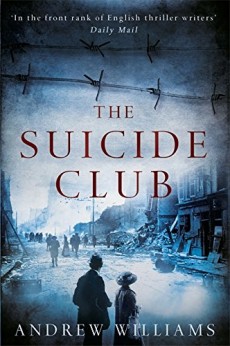 This dark and disturbing story from Andrew Williams, a former journalist, Panorama and Newsnight producer, is an intelligent, factually based historical-political thriller. It blends the pressures of the cabinet office, the internal struggles between the army and the newly formed Intelligence Services and the divisions inside Field Marshall Sir Douglas Haig’s headquarters, with the dirty and dangerous business of the Belgian resistance, all set against the background of the bloody 1917 battles of Passchendaele and Cambrai.

Williams’ hero, Sandy Innes, a Scottish Catholic officer, is a complex but very sympathetic character. Having survived being buried alive, he is conflicted about his sense of duty, loyalty and faith, but finds both purpose and love in his undercover work with the Belgian resistance movement.

Innes is caught in this power play between the generals at GHQ and the Whitehall politicians, and soon becomes aware of massive divisions in Whitehall, many based on religious prejudice, within Haig’s staff, and starts to suspect that the information on which the generals are basing their offensive may, in fact, be a German counter-intelligence operation.

With thousands of lives at stake, Innes must navigate a series of moral and factual mazes and put his own life on the line to find the truth. Set over a period of a few months in the summer and autumn of 1917, the story is based on real events.

The workings of the Belgian underground, the variety of those involved, including many Catholic priests, and the risks they ran, are vividly described in a compelling and detailed portrait of the intricacies of war – which never neglects the sacrifice and bravery of those on the front lines, the ‘lions led by donkeys.’

The Suicide Club is comprehensively researched, carefully plotted and quite brilliantly written. With an unerring sense of locale – from an Antwerp brothel to the GHQ mess – and period, the sheer impetus of storytelling makes it almost impossible to put down.

Williams, like John le Carre, is clearly fascinated by the business of trust and betrayal, but somehow manages to balance all the elements with totally persuasive characters, a strong narrative and disturbing correspondences between fact and fiction.

Among the many books on the First World War now being published, this stands out as an exciting and fascinating read that sheds light on a little known aspect, but never allows it to get in the way of a gripping plot, tense set-pieces and convincing, memorable and sympathetic characters.