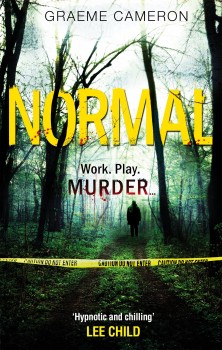 He’s in control of his life, a practiced serial killer skilled in his chosen art. But when he kidnaps Erica, his life starts to unravel.

A serial killer murders a young woman in her parents’ home, cuts her into pieces and prepares to remove her body from the scene in the back of his van. But as he’s moving the trash bags, he’s interrupted by her friend, Erica, and he makes the biggest mistake of his life – he abducts her.

He keeps Erica in a cage in a basement he’s had built under the garage of his remote home, out in the woods. She’s feisty, and he likes that, he likes her spirit, and he tells himself that’s why he’s buying her microwave meals because she refuses to eat his cooking.

While Erica’s still in his basement, he meets Rachel. Rachel isn’t like anyone he’s ever met before and rather than wanting to kill her, he finds himself wanting to spend time with her, so much so that he starts to forget about his captive, leaving her with nothing but Rice Krispies and a blocked toilet from day to day.

He continues his spree, but killing starts to taste wrong, doesn’t satisfy his needs, and he realises he’s changing, regretting his past actions, hoping for a future with Rachel. That is, until Erica gets out of her cage and he gets a taste of the hell he’s put his victims through.

This book is shining brilliance. In the same way Thomas Harris has made generation after generation of readers sympathetic to Hannibal Lecter, Graeme Cameron has created a serial killer you can’t help but like. His murder of Sarah at the beginning of the book is callous and brutal, but almost immediately his attitude towards Erica, by comparison, is hesitant and almost caring. She’s the start of his change, and the end of it.

Our serial killer meets Rachel, a carefree girl living life for the sheer joy of living it and slowly but surely, she becomes the focus of his life. The author takes the reader on the same journey as our killer goes on, from a slayer of women to a man in love. It’s an often vicious journey, yet at the same time a haunting one, utterly believable and very compelling.

This is crime writing at its most masterful, characterisation at its very best, and an addictive novel with a finale that doesn’t disappoint.