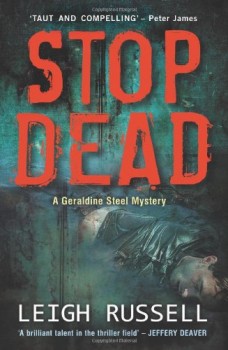 DI Geraldine Steel investigates when a businessman is brutally killed and his wife and her young lover are automatically suspects, but then another murder takes place by the same method.

When a successful businessman Patrick Henshaw is found dead in his car, parked outside someone else’s garage, his glamorous wife, Amy, and her young lover, Guy, are automatically high on this list of possible suspects. DI Geraldine Steel is trying to keep and open mind, but Sergeant Samantha Haley is convinced they’ve already found the culprits.

Matters become complicated when the contents of the dead man’s will become known, and his wife Amy is shocked to learn that instead of being a wealthy woman, she’s actually saddled with some very big debts. At this point Steel manages to drive a wedge between Amy and Guy and accusations quickly start flying around between the two of them.

Then the dead man’s business partner in a profitable restaurant is found dead, murdered in an almost identical manner and suddenly the picture is by no means as clear as Sam Haley had believed. The only evidence they have to go on is two hairs, one found at the scene of each crime. But the hairs are different colours and the DNA evidence seems to lead up a blind alley in both cases. One woman is dead and the other is serving a life sentence in prison.

Complications then come thick and fast in the shape of an ever-increasing body count and Steel is under pressure from her bosses to make a breakthrough, while her impulsive sergeant leaps from theory to theory with the agility – and at times the brainpower – of a squirrel. Sam Haley’s constant latching onto the most simplistic idea then onto one theory after another rather rapidly becomes irritating but she seems forced into the role of outlining possible explanations to the audience and has little chance to develop in her own right. Geraldine Steel isn’t, at first glance, the most interesting of main characters, but she does provide a solid enough hook on which to hang a story of ruined lives and obsessions.

While not all of the answers to the puzzle are immediately obvious, there were times when the main characters seemed singularly slow to follow up some obvious leads, and even after the inevitable explanations at the end I was still left somewhat in limbo, not wholly clear as to the motives for some of the killings, with the other deaths being explained in an extremely perfunctory and not wholly satisfactory way. The book would also have benefited from a knowledge of modern solicitors’ practices that was not wholly derived from the pages of a Dickens novel.