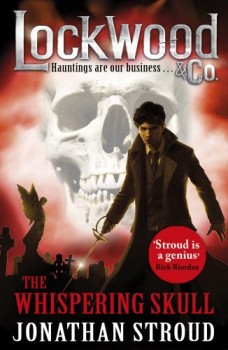 Lockwood & Co go up against the Fittes Agency again in the search for a deadly relic that’s been stolen after being dug up from a London graveyard.

London’s most ramshackle psychic investigation agency is back in the second in the delightfully inventive Lockwood & Co series by Jonathan Stroud.

The country is still awash with ghosts, ghouls and things that go bump in the night. At the same time, Lockwood & Co is still locking horns with the larger, slicker and far better organised Fittes Agency. A cluster-haunting on Wimbledon Common gets the book off to a brisk and suitably grisly start, bringing them into conflict with arch-rival Quill Kipps and his team, and things turn messy rather quickly, with both sides treating the encounter as yet another grudge match.

Soon afterwards, ghostly goings-on in a London cemetery lead to more friction between the two teams when a dangerous relic goes missing, and the rival agencies are each given the task of retrieving it. Neither side has any intention of playing like nice puppies and both end up agreeing to a bet whereby the team which fails to retrieve the relic publically acknowledges their rivals as the better agency.

Lucy Carlyle, the narrator of the story, has a lot to put up. She not only has to deal with the suave, secretive Anthony Lockwood and his sidekick, the argumentative and obsessive George Cubbins, who’s determined to unlock the secrets of life after death, but also to add to the mix, there’s a ghostly skull in a glass jar dispensing a nice line in taunts and sarcasm, and delighting in setting the three of them at each others’ throats. All in all, it’s anything but a stable situation.

George is convinced that Lucy’s ability to talk to the skull is going to be the key to fame and fortune, and starts to conduct a series of increasingly bizarre experiments in a bid to get it to speak again, but when it does break its silence, things take an even more sinister turn.

Stroud is adept at invoking an atmosphere of gas-lit menace, and neatly explains the prominence of teens and younger ages by the fact that anyone older than that starts to lose their psychic abilities, which is why adults are often reduced, quite believably, to a bystander role. It’s a clever way to solve what Malcolm Saville once talked about as the problem of how to get rid of the parents. In Stroud’s world, it’s adults who observe a nightly curfew, while teenagers and even younger children are the ones on the front line of defence against the Visitors, as the various types of ghost are called.

The pace never drags, building inexorably to a tense, clever climax, in which Lockwood & Co have to work with their bitter rivals in order to stay alive. Stroud produces several genuine heart-in-the-mouth moments, and pulls off one masterstroke that left me grinning in surprised delight.

This is very stylish young adult urban fantasy, with more on the way, I’m pleased to say. I can take any amount of the tough, gutsy Lucy and her companions, and it looks very much like we’ve only started to scratch the surface of her psychic abilities. She’s also a dab hand with a rapier.