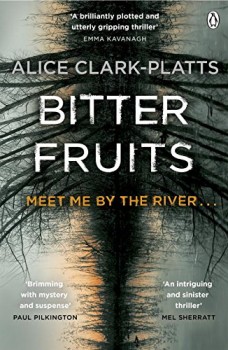 DI Erica Martin is drawn into the privileged world of university students and the murky world of social networking after first year student Emily Brabants is found dead.

You know when a book feels slightly ‘off’ to you and you end up wondering about its accuracy? Well, Bitter Fruits crash-landed spectacularly in that category.

This debut novel from a former human rights lawyer focuses on Durham University. At this point I declare an interest and admit that I’ve lectured in different UK universities over 25 years – and within pages was wondering seriously how much research Alice Clark-Platts had done. Apparently she did her degree there – but that doesn’t mean students are familiar with the workings of the place. And a tame colleague at Durham confirmed that the university doesn’t award double firsts

Particularly off-putting was the character of the sleazy college principal, who was referred to throughout as Principal Mason – which sounds American. British universities tend towards informality – at the very least he’d have been Mr Mason, and he’s more likely to be a distinguished academic. In fact, in several places I checked that the book was actually set in Durham UK and not some American town straight out of Donna Tartt.

There are plenty of posh kids either side of the Pond, and they’re out in force in Bitter Fruits. Emily Brabants, a first year student at Durham, is found dead. She’s part of the trendy set at Joyce College – but the enquiry uncovers some unsavoury aspects of her private life and reveals the lengths Emily went to so that she would be popular amongst her peers.

Bitter Fruits is neither fish nor fowl, as the old cliché goes. And it suffers from being neither a clear-cut police procedural nor a psychological thriller. I’m inclined to think that the latter would have served Clark-Platts better, as she serves up the most deadly-dull cop I’ve ever encountered. Don’t ask me to tell you anything about DI Erica Martin, as I can’t remember a damn thing about her, just days after finishing the book, except that I’m sure she wouldn’t be young enough to have paid tuition fees at university.

The book’s central theme – and a very topical one – is the issue of social networking among young people. But I’m not entirely convinced that Clark-Platts spends much time on Facebook – she does a lot of hand-waving to avoid having to explain how social media sites work! Even the police would struggle to get photos taken down off there, let alone the very unconvincing character of the university counsellor. And it is possible to untag yourself in photos – but that would stand in the way of a plot thread! Put simply, universities have no influence over what happens on outside social networking sites. And I rather think that if I were a cop investigating this case that my first port of call might have been the university’s central student records section – but that would have stymied a plot thread as well.

The book isn’t an absolute turkey, and I was kept intrigued by the mysterious character of Daniel, Emily’s faithful friend. But none of the other characters did a thing for me, which makes it the old story of you don’t have to like them, but you have to feel something for them. And frankly, this cast were all unpleasant and unconvincing.

Bitter Fruits would have been considerably better if the author had done some research – and then curbed her tendency to ramble around the houses, sharpened up some leaden dialogue and focused on presenting a well-paced story that hangs together coherently.