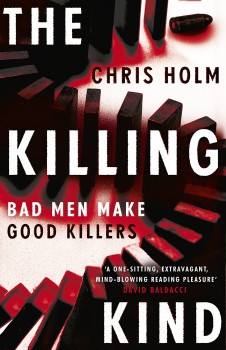 Michael Hendricks is a contract killer, but his quarry is other killers. The only problem is that one of them has his sights fixed firmly on him.

Everyone close to him, including his fiancée, believes Michael Hendricks is dead, killed in action in Afghanistan. Only Lester Meyers, the only other soldier who survived the attack, knows the truth: Michael is very much alive, and still in the business of killing. The only difference between Michael and other contract killers is that he only takes out his own kind, other hitmen.

The problem with what Hendricks does is that it doesn’t half make him unpopular with the wrong people, and he soon ends up with a price on his own head, being hunted by the sinister, sadistic Engelmann, brought in by the bosses of an organised crime outfit to prevent Hendricks getting in their way again.

It’s a game of cat and mouse but in this instance, the mouse doesn’t even know there’s a predator on his trail. And Engelmann isn’t the only one after Hendricks. FBI Special Agent Charlotte Johnson has been tracking what she calls her ‘ghost’ for a while; a man who kills other hitters and then melts away from the scene as if he’d never been there.

With his friend’s help, Hendricks cracks some encrypted messages and decides to intervene in the case of a man who made off with a large amount of money from a crime syndicate and has been keeping a low profile ever since. But a mad massive win at a casino blows his cover and Hendricks is able to convince him that he’s in need of some very specialist protection.

The Killing Kind got off to rather a slow start for me and it took a while for the characters to get established in my mind, but I persevered and was glad I did. When the book burst into life, there was no looking back, and I was thoroughly caught up in Hendrick’s attempt to keep Eric Purkhiser alive. The Killing Kind is well-described and vivid, especially the scenes of chaos in the casino when the balloon bursts, and in this case the balloons are very definitely part of the action!

We don’t learn much about Hendricks and his back story, which is possibly one reason why it took a while for me to get to know him as a character, but when he does start to develop, he carries the action convincingly, especially when pitted against multiple opponents.

This is a fast, hard-edged thriller that doesn’t pull its punches, especially in scenes of violence, but thankfully most of the really nasty stuff is alluded to rather than presented in glorious technicolour, which makes it a little easier to stomach. This is definitely a book to stick with, as it more than repays the effort with a white-knuckled ride to an explosive finish.