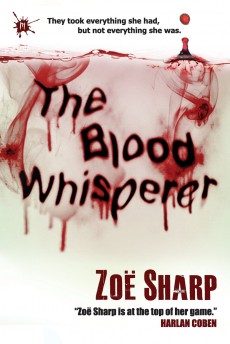 Former crime scene investigator Kelly Jacks simply can’t ignore the evidence, even though it’s not her business and no longer her job.

Zoë Sharp takes a break from her long-running Charlie Fox series to tackle a standalone crime thriller featuring former crime scene investigator Kelly Jacks, who now works as a specialist cleaner, mopping up the aftermath of the sort of scenes that used to be her job to analyse.

Kelly lost the job she loved with the police when she woke up to find herself next to the butchered body of a man, with all the evidence pointing to her as the murderer. With no memory whatsoever of the events immediately surrounding the killing, Kelly was unable to offer up much of a defence, so she ended up doing five years in prison for a crime she doesn’t even know if she committed.

Since her release, Kelly has been content to just get on with her job, but when something doesn’t seem quite right at the scene of a presumed suicide, she finds it hard to ignore the evidence she built up her entire career on. The powers that be seem keen to write off the death of Veronica Lytton as self-inflicted, but something in the pattern of the bloody splatter makes Kelly wonder if her death had in fact been very carefully staged. She does her best to flag up the problem, but she’s told to get on with her job and clean up the scene of the woman’s death.

When Kelly finds it impossible to go against both her training and her instincts, she finds herself drawn into the sort of nightmare world of criminals and violence that she thought she’d left behind on her release from prison. But it’s the skills Kelly learnt behind bars that she now has to rely on to keep her alive.

Sharp’s stock-in-trade is her ability to write strong, believable female leads who defy stereotyping. Kelly Jacks is 40ish, but with her short, spiky hair and nose-stud, could easily pass for younger. She learnt to look after herself in prison and doesn’t give her trust easily any more, but she finds herself drawn to Matthew Lytton, even if she has no idea whether he can be trusted or whether he was in any way responsible for his wife’s death.

The book is told from numerous different points of view, all of which come together like the facets on a diamond, shining light on different characters and their motivations whilst cleverly contriving not to give away too much of the plot. The shifts are clearly signposted, neatly sidestepping any suggestion that there’s too much head-hopping going on, and short chapters both keep an element of suspense and move the story on at a decent pace.

The Blood Whisperer looks very much like a one-shot, but it could equally well have the legs for a series.