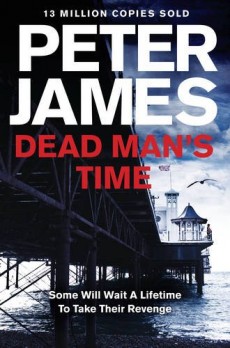 I may be overly cynical (no comments from the cheap seats, thank you!), but I reckon you can usually spot when a British writer has an eye on the American market. For no plausible reason, the action suddenly veers from Little Scratching in the Groin to New York, or a tall, blond and handsome/tall, blonde and beautiful Yank suddenly appears in the UK and becomes integral to the plot.

Peter James, though, has done a sound job of melding an unusual American angle into the latest Detective Superintendent Roy Grace book, where New York gangs of the 1920s meet 2012 Brighton. An elderly woman is attacked and left for dead in her secluded house, and millions of pounds of antiques are taken. The woman's family wield a lot of power, and are willing to use it to get one particular item back.

This series has turned into a rock-solid one that consistently delivers. James has kept a firm hand on Grace's missing wife angle and moved it along in later books. And the main characters face constant challenges, both personally and professionally. Grace and his partner Cleo are getting used to having a baby around. An old enemy, though, wants revenge on the copper. And who is the mysterious woman who wants to buy his old house?

James has always kept the cast list tight and functional, with the cameo roles well-drawn. This time out, the menacing The Apologist and Amis Smallbone stick in the memory. Grace's sparky sidekick DS Glenn Branson, who has a good line in banter with his boss, has personal challenges of his own to deal with.

Dead Man's Time is well-plotted, albeit slightly predictable in a couple of places with the revenge angle. But James, who prides himself on his research, is always convincing. He's an assured storyteller, and this ninth outing for Grace shows that the series still has legs and drive.