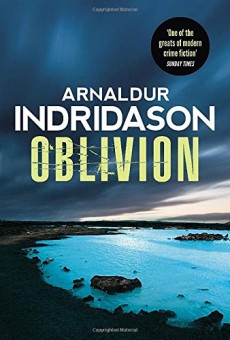 1953: A young girl disappears on her way to college. A newly promoted detective Erlendur is only starting out. 1979: A woman discovers a corpse floating in a blue lagoon. Erlendur is obsessed, though, with the cold case.

1979. A woman swimming in a remote, milky-blue lagoon discovers a male body floating in the water. After the initial police investigations it becomes obvious that the man in his 30s didn’t drown in the pool, as his injuries indicate that he must have fallen from a great height onto a flat surface.

The Icelander Kristvin worked as a mechanic in the aircraft hangars within the US military base, near the international airport in Keflavik. His sister Nanna is questioned and a picture emerges of a man fascinated by all things American, buying marihuana from the American servicemen (to help with Nanna’s cancer), having an affair with a wife one of them, and probably being close to a rough CIA operative. Erlendur and Marion try to dig deeper but they are met with hostility from the US authorities based in Iceland.

1953. Eighteen-year-old Dagbjort disappears on her way to the college in Reykjavik, located near Kamp Knox, military barracks during World War 2, then turned into slum-like accommodation for the capital’s poorest people.

The world has forgotten the case. Dagbjort’s elderly aunt is shaken yet hopeful when Erlendur starts scrutinising old evidence and witnesses’ interviews. That eventually leads him to friends and neighbours who knew the girl and slowly he manages to work out what had happened.

Erlendur is so obsessed with the missing girl’s story that he concentrates on pursuing the cold case in his spare time, rather than investigating the recent murder. His determination and stubbornness uncover the sad truth of Dagbjort’s disappearance. However, this allows for the focus to shift to Marion Briem, Erlendur’s mentor and friend, and we have an opportunity to get to know more of her personality and background. Both Erlendur and Marion are searching for the answers, and although their methods are not always completely legitimate, they are definitely effective.

Two strands of the novel move within 25-year period which shows Iceland in all its drab and dreary glory. Indriðason is the master of creating a perfect sense of location, mood and here – the uneasy presence of America in his country.

Without a doubt Arnaldur Indriðason is the King of Icelandic crime fiction and a great storyteller, weaving history, geography and the social issues in his books. Most importantly, Indriðason creates characters with whom we can identify, or at least understand their motives and choices. His prose is poetic, modest, pared down. Each word feels absolutely necessary and the translation by Victoria Cribb is flawless. There is no need for embellishments or verbal fireworks. Although grim and often unsettling, the novels featuring Erlendur always bring some kind of justice, explanation, closure... Oblivion certainly does.