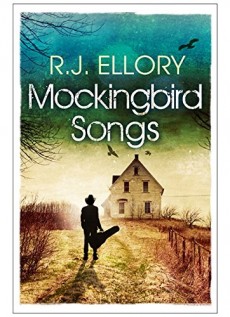 Henry Quinn is released from prison and embarks on a mission to deliver a letter penned by his cellmate to a daughter he has never met.

Henry Quinn emerges from Reeves County Farm Prison, West Texas, having served three years for an accidental wounding after quaffing several beers and loosing off a few rounds. Henry attributes his survival inside Reeves to the help of his cellmate, Evan Riggs, a man who once enjoyed some success as a country singer but is now 20 years plus into a life sentence for a savage drunken murder.

Henry carries a letter given to him by Evan for delivery to Sarah, a daughter born after his incarceration, who he has never met. The book interleaves two stories: the tale of Evan’s family and life, which by the end explains how he came to be where he is; and that of Henry’s quest as he attempts to locate Sarah and deliver the letter to her.

Evan’s only guidance to Henry is that the whereabouts of Sarah is known to Evan’s brother Carson, the sheriff of the nearby town of Calvary. Henry soon locates Carson, but finds him hostile, and discovers that no one else in town familiar with the history of the Riggs family is willing to talk. Luckily, however, he meets Evie, a resourceful girl living nearby, and their determination to shake every tree eventually exposes the truth.

One could make a case for this book being about the tragedy of the free availability of firearms, or over-indulgence in alcohol, or a tale of dysfunctional families, but more than anything else it seems to encapsulate the negative side of Smallville, USA. Sibling rivalry between the Riggs boys, focussed by their competition for Sarah’s mother, Rebecca, would surely have been diffused in an urban environment. Carson’s hold over the folk of Calvary is also only conceivable in the setting of a small town.

The rural location is further emphasised by the home-spun philosophy which emerges from several of the characters, much of it with echoes of the wisdom of country music. This is at one with the chosen careers of both Evan and Henry, who took his first steps as a guitar player before his spell in prison. For both men a rambling lifestyle seems to be an inevitable element of a bent for country music.

If you can live with the bucolic setting and cornpone sentiments, the book certainly has something to offer. The dialogue is tight, and the sense of menace from the seeming inevitability of conflict between contrasting characters carries the reader along.

Brief chapters shuttle between events a generation ago, and Henry and Evie’s current searches, bringing both stories neatly to a final resolution. The several deaths towards the end of the book are shocking not because of any gratuitous detail but because of the way they underline the depth of the tragedy described.