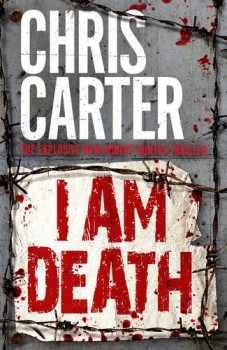 Seven days after Nicole Wilson goes missing, her body is found in a field outside LA International Airport. She has been tortured and her body posed. A posed corpse means a ritual, which gives Detective Richard Hunter limited time until the killer does it again.

Back from vacation and fresh from two investigations which have put them under personal threat, Detective Robert Hunter and Detective Carlos Garcia are handed the case of Nicole Wilson, a young girl who went missing a week ago from inside a house in the Hollywood Hills where she was babysitting. Her body has been found following an anonymous tip-off, she has been tortured and her body posed in the shape of a pentagram. In addition, they find a note stuffed down her throat, signed simply, ‘I AM DEATH.’

Immediately, Hunter and Garcia suspect a ritual motive. But then a second body turns up, a young stewardess tortured and murdered in her own home, the method violent and painful, but definitely not ritualistic. They have a serial killer on their hands, a man leaving no trace of himself on his victims, of which there are more. He’s leaving clues, though, photographs of the victims and notes to the LAPD, and as Hunter deciphers the clues he steps closer to unraveling a story older than he realises.

This novel is brilliant. Chris Carter plays with the passage of time so that you’re not reading exactly what you think you’re reading and rather than confusing, when it finally becomes clear what is going on it’s a revelation rather than feeling like a cheat. His characters of Hunter and Garcia bounce off once another like any classic television crime show partnership and the Captain of their department is the right kind of tough guy required to hold a high rank in a fictional version of the LAPD, while at the same time being human and fair.

My only issue is Carter’s insistence in giving us two pages of background summary on each new character, however long they’re going to be in the book. It’s frustrating because it pauses the otherwise fast pace of the novel and it feels like lazy writing. As well as that, some of the descriptions of the torture are particularly graphic and although never gratuitous they might put some readers off.

But this is one of those books I couldn’t put down once I started reading. It’s not a story of black and white, though; the revelation at the end sets the whole thing in a different light and turns it from a good book into a great one.