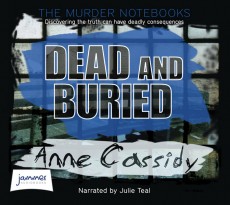 Rose and Joshua’s search for their missing parents continues, but events take an unexpected turn when a body is discovered buried in the garden of the house they used to live in.

Five years ago, Joshua’s father Brendan disappeared along with his partner – Rose’s mother Kathy. The two teenagers are trying in their own ways to come to terms with the fact that their parents, former undercover police officers, have gone over to the dark side, so to speak, and have been executing individuals deemed to deserve the death penalty in a country where there is no longer such a thing as judicial killing.

Since those revelations, Rose wants to distance herself from the search, while she tries to get her heard around what they’ve learned. But Joshua is still determined to track down his missing father. It’s hard for Rose to be apart from Joshua, but at the same time, she has started to build a better relationship with Anna, the grandmother she was sent to live with when Kathy disappeared.

When police office Henry Thompson arrives on her doorstep, he’s bringing news, not of Kathy and Brendan, but something even more unexpected. The body of a young woman has been found buried in the garden of the house where Rose and Joshua used to live. She went missing just before Kathy and Brendan disappeared, and the police want to know everything the teenagers can remember about that summer. They knew the girl, but not well, not unless you count 14-year-old Josh having a crush on her. When suspicion starts to fall on his father, Josh is determined to get to the bottom of the woman’s death, and it’s hard for Rose to stay on the sidelines.

The final part of Anne Cassidy’s four-part Murder Notebooks series delivers a strong and satisfying conclusion, tying up loose ends from the various books but without in any way straining credulity too far. I’ve followed the series from the beginning in audio form, and the books have kept me entertained on numerous long journeys. The two teenagers are strong characters and Dead and Buried sees them operating in an adult world, under threat from various directions.

Julie Teal provides competent, stylish narration as teenage Rose, and dealing equally well with the adult characters, including the hard-boiled ex-police officer James Monroe, who might be a friend but then might equally well be a foe, and Rose’s immaculately-turned out grandmother, Anna. She’s a self-contained woman who tries to do her best, but who clearly has no idea how to relate to a granddaughter she barely knows, despite them having lived under the same roof for five years.

Dead and Buried is a must for anyone who has been following Rose and Josh’s adventures, but if you’re coming new to their story, be warned, there are naturally significant spoilers for some of the other books. This is gripping young adult series well worth following to a conclusion.