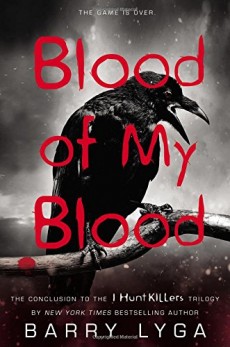 Blood of My Blood

Jasper Dent – Jazz to his friends – knows he’s the only person who can end a serial killer’s reign of terror, but as the killer in question is his own father, it’s never going to be an easy job.

Jasper Dent – Jazz to his friends – was brought up by his father, the most prolific and notorious killer in history. Jazz learnt all there is to know about the business of killing from Billy, and he’s determined that his reign of terror will be brought to an end. The cops have the same endgame in mind as well, but Jazz knows he’s the only one who can bring Billy to justice.

Blood Of My Blood picks up immediately where Game, the second book in the series, left off, so if you’re coming new to the books, you will have a certain amount of catching up to do. In the early stages there’s not much to explain how Jazz ends up in a locked room in a storage facility with a gunshot wound and the dead body of an FBI agent.

When the cops arrive, Jazz is immediately cast in the role of Public Enemy Number 1, and is promptly carted off and handcuffed to a hospital bed. He needs to get away as fast as he can, as Billy is holding Jazz’s girlfriend, feisty teenager Connie, and his mum, Janice. Connie is one of the stand-out characters in the books, along with Howie, Jazz’z best friend. Howie is always there for Jazz, despite the fact that any physical injury is capable of killing him, as Howie has haemophilia. Connie is brave, resourceful and determined, but capable of making some far-reaching mistakes. Her relationship with her father is strained at times, but it’s great to see him standing up for both his daughter and Jazz, despite the fact that he would be happier if Connie never sees Jazz again.

It helps to have a strong stomach if you’re reading Barry Lyga’s books. He doesn’t pull any punches in his descriptions of death, but even more horrifying than some of the killings is the calm way Jazz processes what has happened, with his unique insights into the mind of murderers. The conclusion, when it finally comes, is even more shocking than anything that’s gone before. There were times when I couldn’t see how Lyga was going the wrap everything up, but he does, and, most impressively, without reams of tedious exposition.

Blood of My Blood is gruesome, enthralling and painfully sharp. This is definitely at the grittier end of the young adult market, but the nastiness is all there for a reason, which is what makes it bearable.