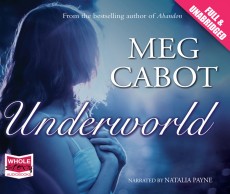 There’s nothing ordinary about 17-year-old Pierce Oliviera’s life. She’s dating the Lord of the Underworld, being pursued by Furies and has to save her cousin from suffocating in a coffin.

Underworld is the second book in Meg Cabot’s young adult trilogy starring 17-year-old Pierce Oliviera, who’s been whisked off to the Florida island of Isla Huesos by her mother after Pierce had what everyone insists on referring to as a near-death experience, when in fact Pierce knows perfectly well that she really did die. There was nothing ‘near’ about it.

To complicate Pierce’s life even further, she’s now dating the Lord of the Underworld, the mysterious John Hayden. In common with most romantic heroes, John’s tall, dark and handsome, and positively oozes angst, He also occasionally crosses the line from protective into controlling. Not quite as badly as the protagonist in Twilight and nowhere near as badly as the extremely unlovely Christian Grey, but there were certainly times when I wanted to point out to Pierce that she’s no one’s property.

To find out how Pierce and John ended up together, do check out the first book in the series, Abandon, as Underworld takes up pretty much where that left off, but there is enough backstory woven in to make catching up relatively easy. Pierce made the mistake, so she thinks, of eating in the underworld, and so, like Persephone, it’s going to be hard for her to leave. And if truth be told, Pierce isn’t even sure that she wants to leave, especially as the Furies will be after her as soon as she sets foot in her own world again. But when Pierce sees an image of her cousin Alex suffocating in a coffin, she knows that staying safe simply isn’t an option.

Underworld suffers occasionally from a narrative that’s distinctly lacking in pace, and that isn’t helped by Natasha Payne’s somewhat measured delivery, and there were times when I was mentally cranking up the winding handle in an attempt to move things on. It’s unusual for Meg Cabot to over-write quite as much as this, but despite that, I was still sufficiently intrigued to stick with Pierce’s story. The myth of Persephone is skilfully woven into the story, and this is most certainly not a re-hash, as Cabot has quite a few tricks up her sleeve.

It was nice to learn more of John Hayden’s story and to meet some of the other crew members of the Liberty, the ship whose story connects so many of the characters together. There’s Mr Graves, the blind ship’s surgeon (now doing his best to brew beer!); the imposing and mysterious Mr Liu; tough-looking and equally tough-talking Frank, and Henry, an endearing mix of cocky and vulnerable, especially when he first encounters candyfloss at Isla Huesos’ infamous Coffinfest. Natasha Payne is at her best when providing a diverse range of voices for all these characters.

The story goes up a gear during the race to save Alex, and ends with a cliffhanger guaranteed to make you want to track down Awaken, the concluding part of the trilogy. I certainly want to know how things work out for Pierce and her tall, dark, handsome and technically rather dead boyfriend.

The Greek myth has been given an entertainingly modern slant here. Hades was always one of my favourite characters, so I guess I’m yet again running true to form here when it comes to the bad boys!