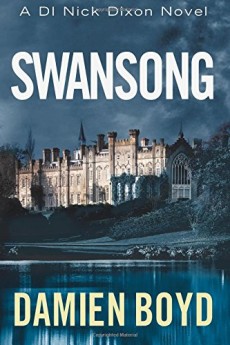 DI Nick Boyd has to confront traumatic memories from his past when he goes undercover as a teacher to investigate the murder of a schoolgirl.

You may have to hand in your scepticism at the door when it comes to the central premise in lawyer Damien Boyd’s fourth novel Swansong. I’m really not convinced that a cop would go undercover in a neighbouring town shortly after he’s been splashed across the media for his success in a high-profile previous case. And those closing scenes in previous book Kickback were particularly vivid.

Isobel Swan, a sixth form student at a Taunton boarding school, is found murdered. Her ring finger has been severed and her throat cut. And it brings back memories for Bridgwater cop DI Nick Dixon that he’d done his best to subdue over the years. And this revelation about Nick’s past is a second reason why he isn’t the obvious choice for the undercover role as a trainee teacher on placement.

It does mean, though, that we finally find out something, four books in, about Nick’s background beyond the fact he’s from the area originally, served in the Met for a while, has a Staffie called Monty, and is diabetic (hence why he’s so particular about eating on time – and he seems to know every pub in Somerset!) And hold on to your hats, as there’s a tiny snippet about one-dimensional cop girlfriend, DC Jane Winter – apparently she has long blonde hair. Four books in, that’s all we know about her!

The previous three books have zipped along quite acceptably, even though they do at times feel under-developed. Boyd has gone for the spartan routine – crisp, no-nonsense prose and a very limited cast list. It’s very rarely that you wish an author would pad a book out a tad – these are good stories and the characters deserve space to develop decently. It’s a shame that the point of view slips periodically, and that Boyd is a contender for a place in the WPC hall of shame!

Swansong isn’t the best of the series, but it’s not bad – Boyd is very good on the creepy atmosphere of school corridors and chapels. But it’s the sort of book which I read with a sceptical eyebrow raised. You won’t guess whodunit, as Dixon keeps clues to himself. And, like me, you may feel that the way the murderer is unmasked is moderately implausible. I want to know whether Boyd ran an experiment for himself!