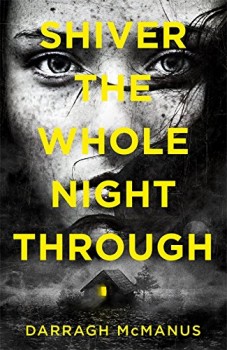 Shiver The Whole Night Through

A small town in Ireland is in the grip of an unusually severe winter. When popular local girl Sláine McAuley is found dead in a wood, everyone seems prepared to put this down to suicide, but 17-year-old Aiden Flood isn’t convinced.

Seventeen-year-old Aiden Flood is the kid everyone gets a kick out of picking on. When he’s dumped by his girlfriend, things get infinitely worse, to the extent that he even considers killing himself by jumping from a bridge into an icy river, but he can’t bring himself to go through with it, and that makes him feel like shit as well.

Suicide seems to be in the air, though, and the following day, the body of local girl Sláine McAuley is discovered in a wood. Everyone in the small Irish town is happy to accept that as the reason for her death, but Aiden isn’t convinced by that explanation, especially not when he receives a bizarre message seemingly from beyond the grave when the words ‘I didn’t kill myself’ are scratched in the ice on his bedroom window.

Aiden is determined to investigate the circumstances of Sláine’s death, and help comes from an unexpected quarter, the dead girl herself. Then as the town falls deeper into the grip of an unusually severe winter, a series of vicious attacks start to happen. These are initially blamed on feral dogs, but then the finger of suspicion starts to point in an unexpected direction.

It’s unusual and refreshing to find a paranormal romance told from the point of view of a teenage boy. Aiden’s a sympathetic lead character and a engaging narrator, although there were times when he did seem somewhat blinkered to what was going on around him, but when you’re in love with a dead girl, maybe some degree of distance from reality is only to be expected.

As the people in the town fall prey to more than just ice and snow, it’s down to Aiden and Sláine to work out who – or what – is behind both Sláine’s death and the attacks, and save themselves and everyone else.

Shiver the Whole Night Through is a darkly compelling story of two teenagers, one dead and one alive, pitted against forces they don’t understand. The climax came out of left-field for me, and there were some genuine heart-in-the-mouth moments towards the end that had me questioning everything I thought I’d understood. This is certainly not a conventional tale of teenage love and loss, but it’s one I very much enjoyed.