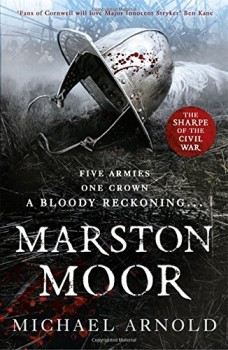 Five armies meet outside York in July 1644 in a brief, but bloody battle which changed the course of history. Battle-scarred Royalist Major Innocent Stryker must call on all his experience to survive the Parliamentary assault and treachery from his own side.

His publishers have done Michael Arnold no favours in labelling the hero of his sixth novel in his Chronicle series as ‘The Sharpe of the Civil War.’ Major Innocent Stryker is a far more conflicted, complex and even callous character with a greater scope for development than Bernard Cornwell’s all-action hero of the Napoleonic campaigns some 150 years later.

Stryker is tempered and scarred both physically and mentally by his involvement in the brutal European religious wars of the early 17th century, and brings a weary cynicism to the unfolding story of Britain’s own civil war.

Marston Moor was the turning point of the struggle. It was the largest battle fought on English soil, and in a matter of a few rainy hours on a Yorkshire upland, it changed the course of history. Royalist power in the north was destroyed, the ultimate course of the war settled. It also marked the beginning of the meteoric rise of a Norfolk squire from Lieutenant General of cavalry to Lord Protector and ruler of England – and the end of the absolute monarchy.

Stryker is as much a witness to these unfolding events as he is participant, and for once, the story moves beyond his viewpoint. The lead-up to the battle, the major personalities on both sides and the fighting itself, are described in graphic, realistic and bloody detail – which only Cornwell can match – is very much the subject of the novel. Almost anything else is secondary.

Stryker is with Prince Rupert’s Royalist forces at Chester. In order to aid King Charles’ hard-pressed southern army, Rupert must secure the port of Liverpool for reinforcements of men and supplies to be brought from Ireland. The town of Bolton is on his army’s line of march and a Parliamentary stronghold. A misjudged attack fails and when the defenders publicly hang a Royalist officer, feelings, already running high, boil over.

The Prince orders anyone under arms killed. His troops run riot, raping and murdering until the streets run with blood. The excesses of the Continental wars have come to England, fanned by religious fanaticism on both sides. Stryker saves a teenage girl, about to become a bride, who has watched her prospective groom and his staunchly Protestant family massacred by a vicious mercenary fighting for the Royalists.

The murderer, as horrific and villainous a creature as you will meet in fiction, swears revenge on Stryker – and continues his pursuit of the girl – and Stryker soon realises he is again at the heart of a mystery which could strike at the heart of the Royalist cause. Rupert, who is faced with apparently contradictory orders from his uncle the King, takes his army to relieve the Marquis of Newcastle, under siege in York from the allied combination of three English and a Scottish Covenanter armies. His brilliant generalship looks set to capture the day and destroy the Protestants, until his own cavalry abandon their posts and a wounded Cromwell, buoyed by his belief in predestination, returns to personally lead his disciplined Anglian troops to a crushing victory.

The battle scenes are extraordinary – a visceral mix of confusion, blood, noise, smell and terror. There is no glory, only men desperate to survive. It is ugly, chaotic, grim and brutal. Arnold knows his period inside out. It is his mix of historical and military insight, knowledge and enthusiasm which pulls you into the dramatic events of Stryker’s life.

Many of the established characters from the earlier books return, though not all will survive. But Arnold, like history itself, is constantly replacing them with new and compelling faces. Until now the Protestant enemy have been seen only in glimpses pertinent to the flow of earlier stories. Here the Parliamentarians are unveiled for the first time, their commanders, good and bad, ambitious and venal, as well as one or two lesser players.

Cromwell, that strange mix of ayatollah and brilliant cavalryman, is well and sympathetically portrayed, as are some of his key supporters we are sure to meet in future stories such as the daring and determined ‘Black Tom’ Fairfax.

This largely bleak and violent tale of a great battle, woven as are all Stryker books with treachery and espionage, is superb, disturbing, colourful and intensely powerful – without doubt the best of the Civil War Chronicles so far.