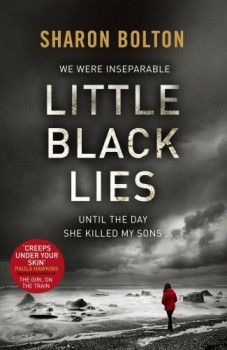 A child goes missing on the remote Falklands Islands. This is not the first time it’s happened and the last two children to disappear have never been found.

Sharon Bolton has taken a break from her Lacey Flint series with this standalone, set on the remote Falkland Islands in 1994, only 12 years after the battle between Britain and Argentina for sovereignty of the islands in which 255 British soldiers died.

When a three-year-old boy goes missing on holiday, fears are immediately raised that this might be connected to the disappearance of two other boys - Fred Harper, two years ago and Jimmy Brown, a year and a half ago. Neither of them was found, and there are those on the islands who believe that Archie West has met the same fate, whatever that was.

Catrin knows what it’s like to lose a child. Her two young boys died in a tragic accident whilst in the care of Catrin’s best friend since childhood. A moment’s inattention on Rachel’s part resulted in the car the boys were in going over the cliff into the sea. Their deaths irrevocably severed the friendship between the two women and for three years, Catrin has been planning her revenge.

Little Black Lies is a haunting tale of the consequences of loss and war. Memories of the conflict are never far below the surface in the islands and for some, like former soldier Callum Murray, the horror has never entirely gone away. Callum was damaged by his experiences during the war and has suffered from post-traumatic stress disorder ever since, although it abated a little when he came back to the islands to live. But his vivid and consuming flashbacks can still be triggered, even by something like the sight of a child’s toy gun, leaving him with blanks in his memory and a crashing sense of guilt.

Catrin is consumed by hatred of Rachel, and her former best friend is tortured by the consequences of her inattentiveness, unable to love her youngest son because of her guilt that she has three living boys whereas Catrin has none, and even lost her third child to a still birth.

Bolton is at her best when dealing with the dark side of life, and Little Black Lies is no exception. Catrin, Callum and Rachel, who each narrate a third of the story, are all strong characters, each damaged in different ways by their experiences. The two women’s stories are divided from each other by Callum’s, making it easy to differentiate between them. There are times when it’s impossible to know who to believe, and in Rachel’s story, it becomes clear how tension has been mounting in the close-knit community on the islands as violence threatens to engulf them all.

This stark picture of island life – and death – is one that you won’t find in any holiday brochure. It’s dark, beautifully written and utterly gripping. The ending, when it comes, is one that I had to re-read three times, just to be sure. This is a book with no wasted words, and when you get to the final page, you’ll realise exactly how much Bolton can pack into a single sentence. This is domestic noir at its best.